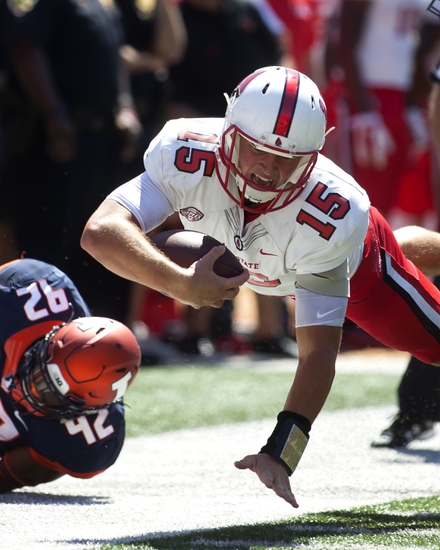 The Tennessee Tech Golden Eagles look for their first win of 2017 when they visit the Ball State Cardinals on Saturday. The Golden Eagles dropped to 0-2 on the year following a 27-14 road loss to Kennesaw State.  Tennessee Tech struggled mightily on the offensive side of the football despite a slight 420-405 yardage edge because of four turnovers with the Owls getting points on three of them. Andre Sale completed 31-42 throws for two touchdowns and three critical interceptions as well which cost Tennessee Tech a chance at stealing a road win. Dontez Byrd was the Golden Eagles best weapon with ten receptions for 109 yards while Andrew Goldsmith was the top runner with 57 yards on nine touches.

The Ball State Cardinals take on FCS foe Tennessee Tech in week three with back to back victories in their sights. The Cardinals are hoping to build on their 51-31 win versus visiting Alabama-Birmingham in week two. BSU rode their offense to a 30-14 second half to put away a stubborn Blazers squad that was a two touchdown underdog. UAB amassed a 504-385 yardage advantage but Ball State would not be denied whenever they sniffed the endzone. The Cardinals held a 2-0 edge in turnovers and received a 93 yard kickoff return from Malik Dunner to bolster the offense. Quarterback Riley Neal paced a productive passing attack that saw him connect on 23-34 for 217 yards and a pair of touchdowns with no interceptions. Justin Hall gave the Cardinals a game high eight receptions for 94 yards and a 12 TD while Caleb Huntley was the top runner with 89 yard on ten touches including a 50 yard scoring burst.

I believe this is a game that is bet on the potential of Ball State who need to put everything together. The Cardinals should cover if they want to with advantages in most areas…