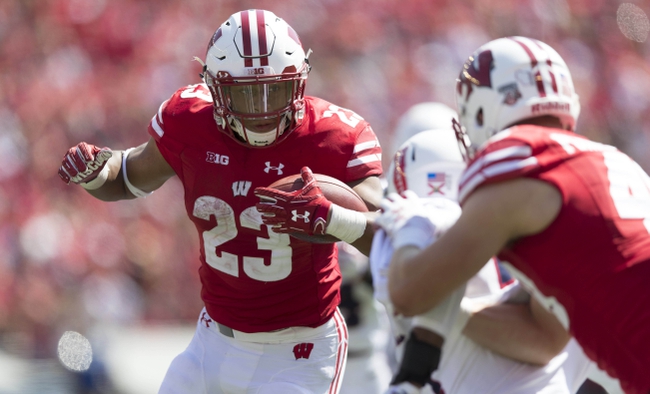 The #10 Wisconsin Badgers take on the BYU Cougars in week 3 college football action from LaVell Edwards Stadium on Saturday afternoon.

The #10 Wisconsin Badgers will look to stay unbeaten after improving to 2-0 this season thanks to a 31-14 win over Florida Atlantic. Alex Hornibrook went 16 of 28 for 201 yards and a touchdown that was cancelled out by an interception. The game ball for the Badgers probably went to Jonathan Taylor, who had a strong outing, posting 223 yards and 3 touchdowns with his 26 carries, while Chris James made up the other half of the 1-2 combo, racking up 101 yards on 16 carries. Troy Fumagalli led the Wisconsin receiving corps, hauling in a team-high 8 balls for 92 yards and the team’s lone receiving touchdown in the win. After Fumagalli, no Badger receiver caught more than 2 passes in the game, including Quintez Cephus who caught a pair of balls for 47 yards. The Badgers combined for 5 sacks as a team, holding FAU to 248 yards of total offense, 9 first downs and just 2 of 14 on 3rd down in the game.

The BYU Cougars will look to avoid falling to 1-3 after dropping back-to-back games, including a 19-13 loss to in-state rival Utah in their last outing. Tanner Mangum completed 21 of his 39 pass attempts for 170 yards, a touchdown and 3 interceptions. Ula Tolutau led the Cougars’ backfield with 25 yards and a touchdown on 5 carries, while Kavika Fonua racked up 22 yards on 8 carries. Matt Bushmon led BYU with 6 catches for 50 yards while Trey Dye caught 3 passes for 19 yards and a touchdown. Defensively, BYU forced 3 fumbles and recovered 2 of them, while holding Utah to 3 of 14 on 3rd down, but still allowed 430 yards of total offense in the losing effort.

BYU has had trouble defending home soil, while Wisconsin has garnered the reputation of being road warriors against the spread. As far as this game goes, I think Mangum’s struggles against a decent Utah squad will only be compounded by going up against one of the best defenses in the country in Wisconsin. I think getting a line around 13 points is a gift, so I’ll take the Badgers here.