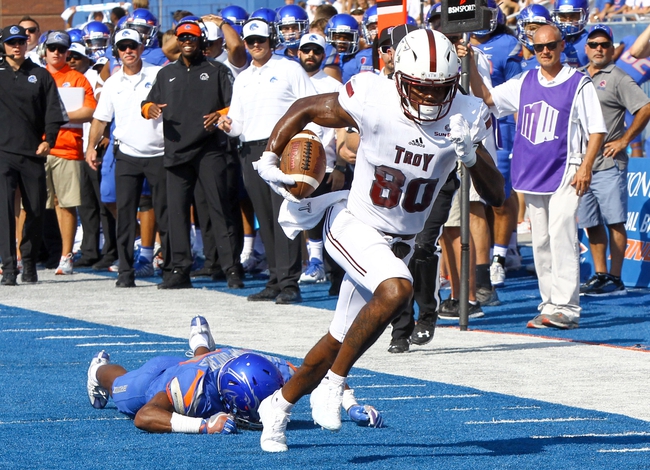 The Troy Trojans are on the road in week three in search of consecutive victories in their conference opener versus the New Mexico State Aggies. The Trojans bounced back from an opening week loss at Boise State to upend FCS opponent Alabama State. Troy was ferocious on both sides of the football with the Hornets held to only 165 yards and 12 first downs while their own offense racked up 607 yards and 34 first downs with the ability to run and throw as pleased. Brandon Silvers led a potent Troy passing game as he connected on 32-40 for 345 yards but did throw an 80 yard pick six. Damion Willis and Jordan Chunn gave the Trojans seven receptions apiece for a combined 166 yards with eleven players posting catches. Jamarius Henderson was the Trojans top runner with 107 yards on eight tries and a pair of TD’s while Chunn added 61 yards on 13 totes with a trio of touchdowns.

The New Mexico State Aggies are gunning for back to back upsets when Sun Belt rival Troy pays a visit on Saturday. The Aggies come off a 30-28 win at New Mexico in an always heated matchup for the Rio Grande Trophy. NMSU built a 30-5 lead heading to the 4th quarter before having to survive a 23-0 Lobos run and a failed two point conversion with 1:11 left to secure the win. New Mexico State rolled to a 500-430 edge in real estate with a 4-2 advantage in turnovers. Larry Rose II and his 21 carry, 99 yard rushing yards was a less then average rushing attack by the Aggies. New Mexico State was a different animal in the air with quarterback Tyler Rodgers connecting on 34-57 for 401 yards and four touchdowns and an interception. Izaiah Lottie caught two touchdown passes with an 80 yarder while Jaleel Scott posted eight receptions for 91 yards and a score.

For me this game comes down to Troy having vast potential to air it out while being capable of controlling the Aggies passing attack. I’ll back the defense of the Trojans…