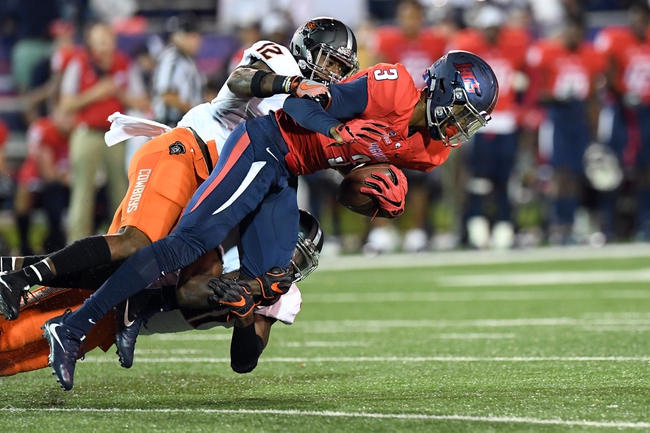 The Alabama A&M Bulldogs look to get in the win column when the team travels to FBS and instate rival South Alabama. The Bulldogs were overwhelmed 42-0 at Vanderbilt in week two as a 48 point underdog. Alabama A&M fell behind 35-0 at the half and never threatened as they were outgained 401-103 and committed a pair of turnovers. The Bulldogs needed to produce some viable yardage on the ground to milk the clock and move the chains a bit more but the team had their backs against the wall without All SWAC RB Jordan Bentley. AA&M quarterback Damion May connected on 3-8 for 29 yards  with an interception and ran for another 27 yards on six carries. Aqeel Glass also took snaps at QB and went 5-13 for 15 yards and a pick with the Commodores defense swarming the Bulldogs on the ground and air.

The South Alabama Jaguars look for their first win of the season when the Alabama A&M Bulldogs pay a visit on Saturday. The Jaguars were humbled 44-7 by the visiting Oklahoma State Cowboys with obvious struggles on both sides of the football. The Cowboys racked up 505 yards while USA was held to only 175 yards and adding insult to injury were a pair of turnovers. South Alabama tried to establish the run to keep a potent Oklahoma State offense on the sidelines as much as possible but the team was held to under 60 yards on the ground with Xavier Johnson totaling 36 yards on five carries being the highlight. The Jaguars enjoyed little success throwing the ball with quarterback Dallas Davis completing 13-23 for 126 yards and a touchdown and a pick six. Jamarius Way was the top South Alabama receiver with five receptions for 66 yards while Maaseiah Francis caught a 17 yard scoring throw in the 4th to avoid the shutout.

I think both squads will be leaning on their respective defenses and to me that means the scoreboard won’t be lighting up. It’s take a shot at the under or don’t touch it…