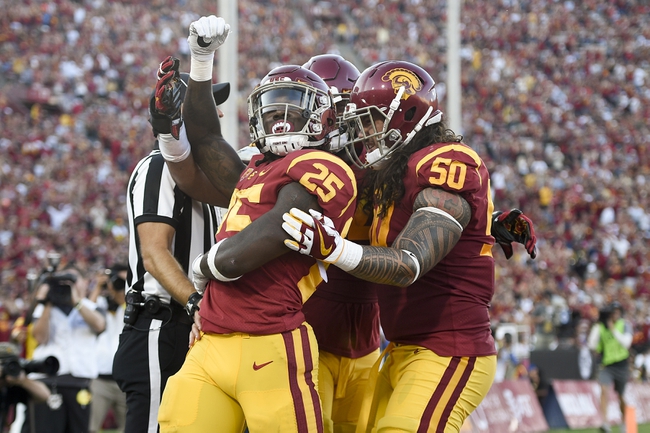 The Texas Longhorns will travel to Los Angeles Memorial Coliseum to take on the 4th ranked USC Trojans this Saturday night in College Football action.

The Texas Longhorns improved to 1-1 on the season after defeating San Jose State Spartans, 56-0, this past Saturday. Texas dominated on both sides of the football throughout the entire game and had no trouble cruising to victory after taking a 21-0 halftime lead. The Longhorns outgained the Spartans by a 623-171 margin and won the turnover battle by a 2-0 margin. Leading the way for Texas was RB Chris Warren III who had 2 TD and 166 rushing yards on 16 carries. On the season, the Longhorns are averaging 48.5 ppg on 548.0 total yards per game (296 passing yds/g; 252 rushing yds/g). Offensively, Texas is led by RB Chris Warren III who had 2 TD’s on the season and is averaging 98.0 yds/g on 11.0 att/g. Freshman QB Sam Ehlinger played well in his first career start (55.6 comp %, 220 yards, TD) as he replaced starter Shane Buechele (65.4 comp %, 2 TD, INT, 375 yards) who was out due to a bruised throwing shoulder. Buechele is going to give it a go at practice this week, but is still questionable for Saturday’s game. Texas has a stable of talented WR's in Collin Johnson (4.5 rec/g, 87.5 yds/g, TD), Reggie Hemphill-Mapps (5.0 rec/g, 58.0 yds/g), and Armanti Foreman (5.0 rec/g, 54.0 yds/g, 2 TD). Defensively, Texas is holding their opponents to an average of 25.5 ppg on 326.5 total yards per game (174 passing yds/g; 152.5 rushing yds/g). The Longhorns have forced 3 turnovers so far in the season and have a turnover margin of +1.

Texas had a nice bounce back victory after their embarrassing opening season loss at home against Maryland, however, it’s important not to read too much into a victory over the Spartans who are projected to finished last in the Mountain West this season and will have trouble all season keeping opponents under 45-50 points. USC and Sam Darnold also struggled in their season opener, but looked like a national title contender against Stanford as their offense looked almost unbeatable. Texas is heading in the right direction under Tom Herman, however, this is a defense that was scorched for 51 points at home against Maryland and as I think USC will have no trouble putting up similar offense numbers as they did against Stanford, I think USC wins this one by 3 TD’s and covers.