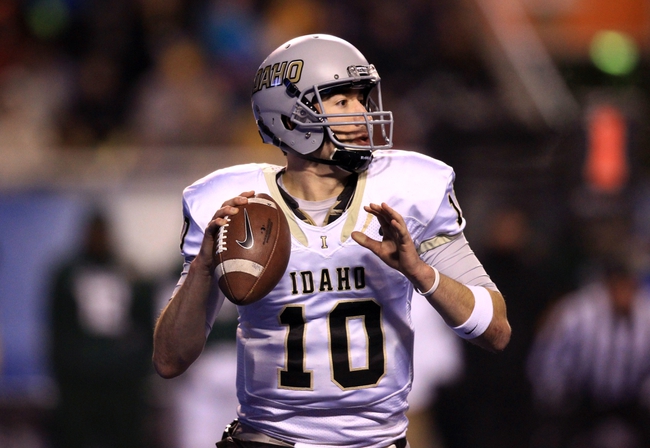 The Idaho Vandals will travel to Waldo Stadium to take on the Western Michigan Broncos this Saturday night in College Football action.

The Idaho Vandals are 1-1 on the season after losing to the UNLV Rebels, 44-16, this past Saturday. Idaho played the Rebels tight early, trailing only by a 10-3 margin at halftime, however, struggled defensively in the 2nd half and couldn’t fight back after falling behind by a 34-10 margin with 3:51 left in the 3rd quarter. The Vandals were outgained by a 550-384 margin and struggled stopping the rushing attack of the Rebels, allowing UNLV to gain 357 yards on the ground. Leading the way for Idaho was QB Matt Linehan who completed 22 of 34 passes for 261 yards, 1 TD, and 1 INT. On the season, the Vandals are averaging 22.0 ppg on 370 total yards per game (212 passing yds/g; 158 rushing yds/g). Offensively, Idaho is led by RB Aaron Duckworth who has 1 TD on the season and is averaging 112 yds/g on 18.5 att/g. QB Matt Linehan has completed 67.9% of his passes on the season for 3 TD and 3 INT while averaging 212 passing yds/g.  The Vandals WR’s are led by Jacob Sannon (7.5 rec/g, 75.5 yds/g, TD) and Reuben Mwehla (5.0 rec/g, 41.5 yds/g, 2 TD). Defensively, Idaho is holding their opponents to an average of 25.0 ppg on 370 yards per game (144 passing yds/g; 226 rushing yds/g). The Vandals have forced only one turnover on the season and currently have a turnover margin of -3.

The Western Michigan Broncos fell to 0-2 on the season after losing to the Michigan State Spartans 28-14 this past Saturday. The Broncos offense struggled against the talented Spartan defense and couldn’t fight back after Michigan State took a 28-7 lead with 10:48 left in the 4th quarter. Western Michigan was outgained by Michigan State by a 457-195 margin and lost the 1st down battle by a 21-11 difference. Leading the way for the Broncos was their kick returner, Darius Phillips who averaged 45.3  yds on four kick returns, which included a 100 yard return for a TD. On the season, Western Michigan is averaging 22.5 ppg on 276.0 total yards per game (86.5 passing yds/g; 189.5 rushing yds/g). Offensively, the Broncos are led by the RB duo of Levante Bellamy (10.5 att/g, 84.5 yds/g) and Jamauri Bogan (13.0 att/g, 53.5 yds/g, TD). QB Jon Wassink has completed 45.8% of his passes on the season for 0 TD’s and 2 INT while averaging 73 passing yds/g. The Broncos leading receiver is D'Wayne Eskridge who is averaging is averaging 2.5 rec/g for 27.0 yds/g. Defensively, Western Michigan is holding their opponents to an average of 38.5 ppg on 489.0 total yards per game (225.0 passing yds/g; 264.0 rushing yds/g). The Broncos have forced 4 turnovers so far in the season and have a turnover margin of +2.

Idaho had no answers in the 2nd half against an underrated UNLV team, however, the Vandals are still coming off a bowl appearance and have some offensive talent in their last season in the FBS before joining the Big Sky conference in the FCS next season. Western Michigan has played some tough competition to start the season, however, the Broncos have to be happy to with what they’ve seen out of their team so far, especially on the defensive end, as they did give both USC and Michigan State some trouble. I felt more confident with Idaho a week ago before they only were able to put up 16 points against the UNLV defense, however, the Vandals are a solid team with a great QB and I think Idaho will be able to do enough to cover with this many points. Take Idaho to cover.