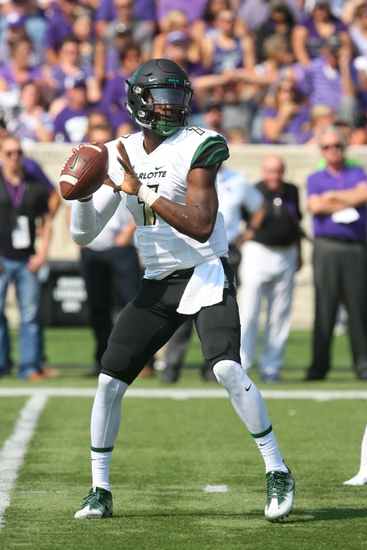 The Georgia State Panthers open their Sun Belt schedule with a trip to the Charlotte 49ers. The Panthers had an extremely tough week three with a trip to face Penn State resulting in a 56-0 defeat. The Nittany Lions scored early and often and never stopped in amassing a 529-320 advantage in yards while the mistake prone Panthers tried to establish the run but were overmatched at the line of scrimmage. When the final gun sounded GSU had turned the ball over five times and easily negated their  nearly 39 minutes of possession.   Connor Manning tried to move the chains through the air by hitting 16-29 for 133 yards but he couldn’t connect with any stretch the field throws and with three interceptions the passing attack did more bad then good. Taz  Bateman gave the Panthers some semblance of a rushing attack with 100 yards on 29 carries while Penny Hart was the top receiving option with 56 yards on seven catches.

The Charlotte 49ers kick off their conference slate with a visit from the Georgia State Panthers on Saturday. The 49ers finally found their offense in a 35-31 defeat versus the visiting North Carolina A&T Aggies but the defense couldn’t make enough stops. North Carolina A&T has been a scoring machine and were slightly outgained 436-424 but Charlotte threw away a chance to win with four fumbles (one lost) and a pair of picks. Ben LeMay was the 49rs best offensive player with 158 rushing yards on 19 carries while Hasaan Klugh and Robert Washington combined for 108 yards on 27 touches with Klugh scoring. Klugh was all over the map throwing the ball with a 13-29 completion effort for 170 yards and three touchdowns and two interceptions including a 74 yard pick six. Workpeh Kofa was  the top Charlotte receiver with six catches for 110 yards and a score while TL Ford II logged two catches  for 41 yards and another touchdown.

Wow, this game has been hit by the ugly stick. I suppose the one good thing about it is that somebody has to win…