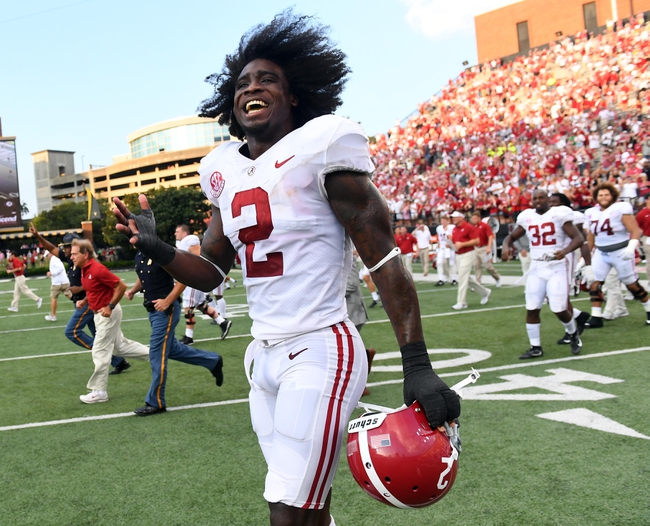 We have some SEC conference action on tap from Bryant-Denny Stadium in Tuscaloosa, as the Ole Miss Rebels pay a visit to the #1 Alabama Crimson Tide in a college football matchup on Saturday night.

The Ole Miss Rebels will look for a big time upset to kick off their SEC conference schedule, and have had an extra week to rest up after a 27-16 loss to Cal in week 3 that gave the Rebels their first loss of the season, falling to 2-1. Shea Patterson threw for 363 yards, 2 touchdowns and 3 interceptions in the loss. Jordan Wilkins led the Rebels with 38 rushing yards on 11 carries, while Ole Miss almost had a trio of 100-yard receivers in the loss. D.K. Metcalf caught 3 balls for 125 yards and a touchdown, while DaMarkus Lodge chipped in 4 receptions for 100 yards and a score. Van Jefferson came up just short, turning his team-high 10 receptions into 94 yards. Defensively, a pair of interceptions from C.J. Moore and a sack from Breeland Speaks highlighted an otherwise average effort from the Rebels’ D, giving up just under 400 yards of total offense in the loss.

The #1 Alabama Crimson Tide will look to keep rolling after improving to 4-0 on the year, winning their SEC opener in a 59-0 road rout of Vanderbilt. The game was as close to total annihilation as you can get in almost every facet of the game. The Tide rushed for 496 yards, led by 151 yards and 3 touchdowns on 12 carries from Damien Harris. Bo Scarbrough put up 79 yards and a pair of rushing TDs on his 11 carries, while Najee Harris added 70 rushing yards and Brian Robinson Jr. took his 5 carries and turned them into 51 yards and a touchdown. Jalen Hurts threw for 78 yards and ran for another 48 while Tua Tagovailoa threw for 103 yards and a pair of touchdowns on 8 of 10 passing. Jerry Jeudy caught 3 passes for 68 yards and a touchdown, while Calvin Ridley caught a team-leading 5 passes for 43 yards and Devonta Smith added a receiving TD grab of his own in the win. Defensively, the Commodores were suffocated to the tune of just 78 yards of total offense and 1 for 10 on 3rd down.

The Rebels have had an extra week to rest up and have kept it close against ‘Bama over the years, however I’m not sure that either matters here. I thought Vanderbilt might keep it respectable last week and the Tide completely destroyed Vandy, who I thought is pretty close to the same level as Ole Miss. The fact of the matter is that Alabama is clicking right now, and I think this one could get ugly early. Give me Alabama here.