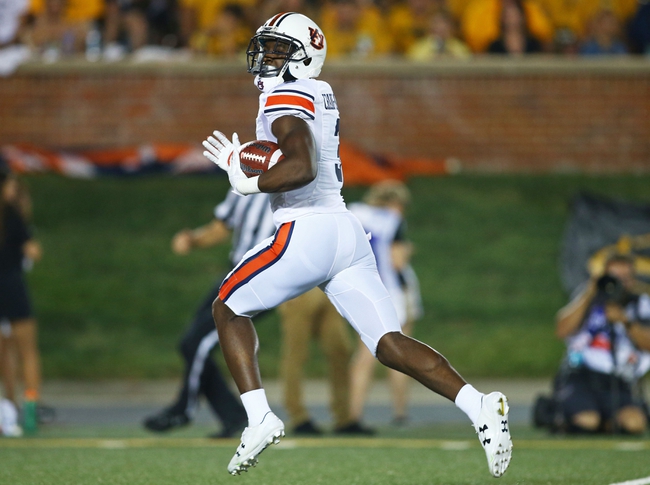 We have a battle of ranked teams in the SEC as the #24 Mississippi State Bulldogs face off against the #13 Auburn Tigers in week 5 college football action from Jordan-Hare Stadium on Saturday evening.

The #24 Mississippi State Bulldogs will look to rebound after suffering their first loss of the season in their SEC opener, falling 31-3 at the hands of then #11 Georgia to go to 3-1 overall and 0-1 in SEC play this season. Nick Fitzgerald threw for 83 yards and 2 interceptions on 14 of 29 passing, while also rushing for 47 yards on 10 carries. Nick Gibson led the team with 52 rushing yards on 5 carries, while Aeris Williams turned his team-high 11 carries into 24 yards. Williams also led MSU with 5 catches out of the backfield for 12 yards, while Deddrick Thomas led the team with 41 yards receiving on a pair of catches. Defensively, a Jamal Peters fumble recovery highlighted an otherwise disappointing defensive outing from Mississippi State, as the Bulldogs allowed over 400 yards of total offense in the loss.

The #13 Auburn Tigers will look to keep rolling after improving to 3-1 following a 51-14 rout of Missouri in their SEC conference opener. Jarrett Stidham threw for 218 yards and a touchdown on 13 of 17 passing, while Kam Martin led the Tigers on the ground with 74 rushing yards. Eli Stove added 56 yards on 3 carries, but the offensive MVP is probably Kerryon Johnson, who turned his 18 carries into 48 yards, which doesn’t sound impressive until you hear about his 5 rushing touchdowns in the win. Nate Craig-Myers led the team with 61 yards and a touchdown on a pair of receptions, while Will Hastings also caught a pair of balls for 59 yards and Ryan Davis led the team with 4 catches in the win. It was an all-around solid effort for Auburn in the win, combining for 3 fumble recoveries, a pair of sacks and an interception, all while allowing 340 yards of total offense in the blowout.

I can’t think that Mississippi State is going to struggle again offensively, but I also need to see that they can hang with teams like Auburn who play a very similar style to that of Georgia, a team who took it to Mississippi state last week. Auburn is one of the most balanced teams in the country, and have appeared to finally have found their rhythm offensively, so I’ll back the Tigers to keep things going with another big win and cover here.