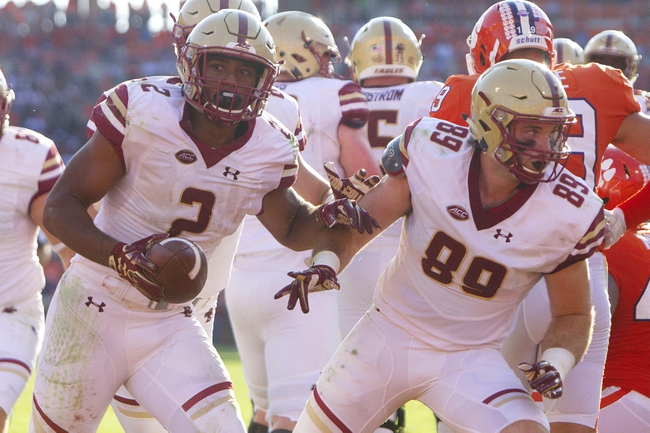 Over on Boston at BC Alumni Stadium, the Central Michigan Chippewas and the Boston College Eagles will be meeting up in Week 5 college football action.

Central Michigan is sitting at 2-2 so far following wins over URI (3OT) and Kansas, along with losses to Syracuse and Miami (OH). In that Miami game, Central Michigan QB Shane Morris went 15-of-33 for 195 yards, one TD and two picks, while Jonathan Ward was the top rusher on 22 carries for 56 yards. Eric Cooper led the Chippewas in receiving on six catches for 81 yards and a TD.

Through four games, Morris has 1165 yards with nine touchdowns and five interceptions for Central Michigan, while Ward has posted 295 yards and a score on 62 carries. Leading the Chippewas in receiving is Mark Chapman, who has 24 catches for 377 yards and three touchdowns.

Over on the Boston College side, they’re currently 1-3, winning the opener against Northern Illinois and posting three straight losses versus Wake Forest, Notre Dame and Clemson. In that Clemson game, Boston College QB Anthony Brown posted a 14-of-30 line for 133 yards and a pick, while AJ Dillon was tops in rushing on 18 carries 57 yards and one TD.

Through four games so far, Brown has 658 yards, five touchdowns and seven interceptions for the Eagles, and Jon Hilliman is the rush leader with 236 yards on 64 carries. Kobay White is the lead Boston College receiver with 16 receptions and 176 yards.

Though the Chippewas have been pretty solid in the passing game so far (aside from the five picks), they’re being dragged down by a 3.8-yard average per rush as a team. As for Boston College, they’re not doing a whole lot of things well right now, giving up a total of 117 points and scoring just 37 over their last three games. The Eagles haven’t really showed up just yet, and the road only gets tougher from here. I’ll take the Chippewas.