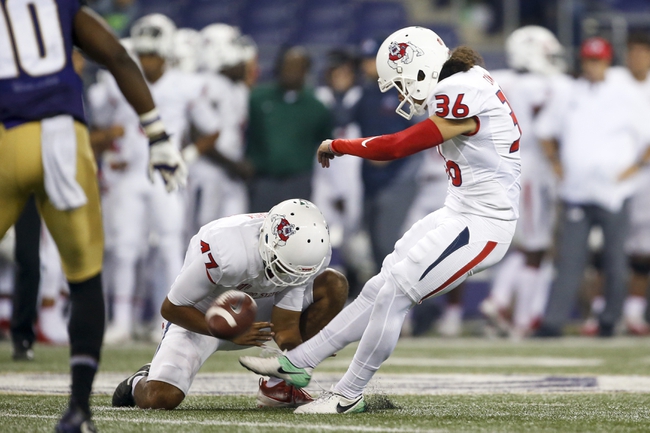 The Nevada Wolf Pack go on the road to take the field with the Fresno State Bulldogs in week five college football.

The Nevada Wolf Pack look for a change of momentum when the team visits the Fresno State Bulldogs in a week five bout. The Wolf Pack look to bounce back from Saturday’s 45-7 defeat at the Washington State Cougars that dropped the team to 0-4. Nevada struggled on both sides of the football and were outgained 560-151 with three turnovers and 21 minutes of possession adding to the struggles. This was a game that Nevada needed a respectable rushing attack to shorten the game and keep the Cougars offense on the sidelines as much as possible. The Wolf Pack didn’t run the ball much with Blake Wright logging 37 yards on five totes and Maliek Broady totaling 17 yards on four carries and a touchdown. Nevada quarterback David Cornwell  tried to get something going through the air but a 13-26 effort resulted in just 95 yards and three interceptions.

The Fresno State Bulldogs open their conference  schedule with a visit from the Nevada Wolf Pack. The Bulldogs stand at 1-3 in the early going following a 48-16 defeat at the Washington Huskies as a 29 point underdog in week four. Washington totaled 420 yards and did the majority of their damage through the air while Fresno State totaled 323 yards but were not viable throwing or running the football. Josh Hokit was the top Bulldogs runner with 29 yards on three tries but the passing game wasn’t able to pick up the slack. The Bulldogs quarterback duo of Chason Virgil and Marcus McMarylon combined to connect on 21-36 for 194 yards with Virgil throwing for a touchdown  and interception while four receivers recorded 16 catches and 165 yards. The Fresno State punt coverage team also struggled with the Huskies ripping off a 77 yard return.