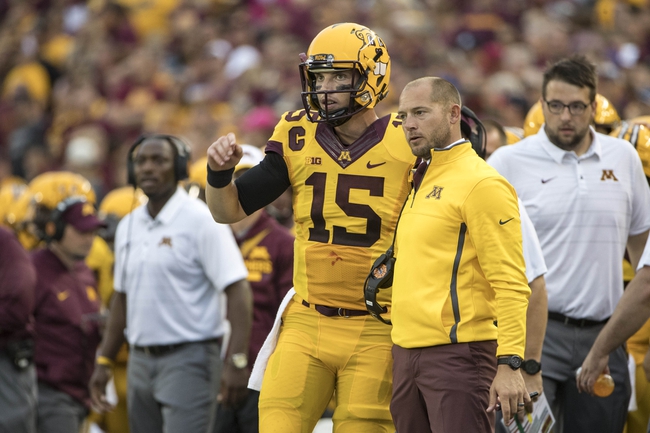 The Maryland Terrapins look for their second road victory of the season to improve on their 2-1 record. The Maryland Terrapins have split their last eight road games. Max Bortenschlager is completing 57.1 percent of his passes for 136 yards, one touchdown and two interceptions. Kasim Hill is doubtful with a leg injury, so Bortenschlager enters this game with 61 career pass attempts. D.J. Moore and Taivon Jacobs have combined for 463 receiving yards and five touchdowns while Jacquille Veii has five receptions. The Maryland Terrapins ground game is averaging 224 yards per contest, and Ty Johnson leads the way with 281 yards and three touchdowns. Defensively, Maryland is allowing 32 points and 403.3 yards per game. Jermaine Carter, Jr. leads the Maryland Terrapins with 21 tackles, Andrew Isaacs has 1.5 sacks and JC Jackson has one interception.

Minnesota has looked really impressive in its first three games and has had an extra week to prepare for this contest. Maryland also looked like a team to keep an eye on before three quarterbacks got hurt. Tyrell Pigrome is out for the season, Hill has a banged up leg and is doubtful, and Caleb Henderson is questionable with a foot injury. While QB isn't everything, not being able to move the football and put up points impacts the entire team, as the defense is on the field far too long and the confidence is quite low across the board. At home last week against UCF, the Terps had just 197 total yards, were 2-13 on third down and scored just 10 points. Hard seeing things be different on the road against a quality and rested Minnesota team. I'll take the Golden Gophers by double digits by default.