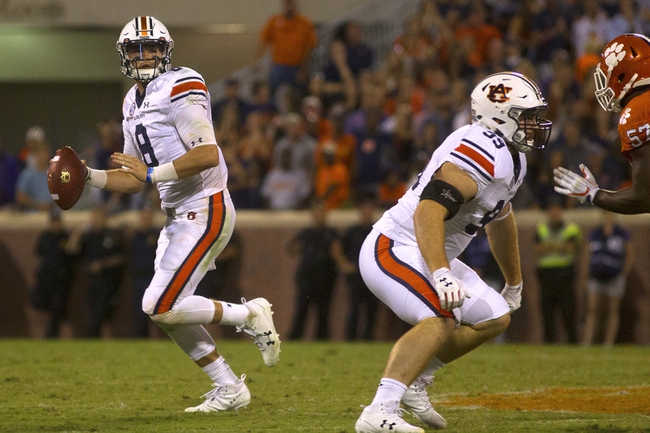 The Auburn Tigers look to remain unbeaten at home to build on their 3-1 start to the CFB season. The Auburn Tigers have won seven straight home games. Jarrett Stidham is completing 70.6 percent of his passes for 846 yards, three touchdowns and two interceptions. Stidham has a combined one touchdown pass in his last three games. Will Hastings and Ryan Davis have combined for 354 receiving yards and two touchdowns while Kyle Davis has five receptions. The Auburn Tigers ground game is averaging 199.5 yards per contest, and Kam Martin leads the way with 210 yards and one touchdown. Defensively, Auburn is allowing 11.3 points and 236.3 yards per game. Tre' Williams leads the Auburn Tigers with 25 tackles, Jeff Holland has 2.5 sacks and Daniel Thomas has one interception.

I'm not sure Mississippi State is for real. Sure, the Bulldogs beat up LSU, but they absolutely crapped the bed last week on the road against Georgia and now have to take another trip to Auburn. Last year, Auburn beat Miss State by 24 points on the road and this years Tigers are better than they were a year ago. Auburn has beat up the lesser comp this season like its supposed to and its only loss was a eight-point contest against argubly the best team in the country the Clemson Tigers. Auburn's defense can make life tough for Fitzgerald and the offense found a spark last week when rushing for five touchdowns on the road against Missouri. I'm not drinking the Miss State kool aid like others, so I'm going to back the Auburn Tigers by double digits.