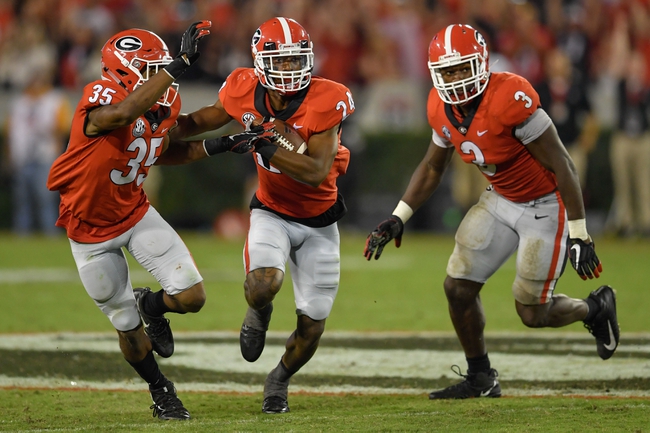 The #7 Georgia Bulldogs will go on the road to take on the Tennessee Volunteers in week 5 SEC Conference action on the gridiron from Knoxville, TN.

The #7 Georgia Bulldogs will look to remain unbeaten after winning their SEC opener by a final score of 31-3 over then #17 Mississippi State to improve to 4-0 overall this season. Jake Fromm completed 9 of his 12 pass attempts for 201 yards and a pair of touchdowns. Nick Chubb led the Georgia ground attack, putting up 81 yards and a pair of touchdowns on 15 carries, while D’Andre Swift racked up 69 yards on 10 carries. Terry Godwin led the team with a pair of catches for 80 yards and a touchdown, while Isaac Nauta’s lone reception went 41 yards for a touchdown. Javon Wims also added a pair of receptions for 43 yards. Defensively, the Bulldogs combined for a pair of interceptions, one from Deandre Baker and Dominick Sanders while stifling the otherwise dynamic Mississippi State offense, holding Mississippi State to just 280 yards of total offense and a 6 for 16 mark on 3rd down in the win.

The Tennessee Volunteers will look to notch their first conference victory after improving to 3-1 with a 17-13 victory over UMASS in their last outing. Quinten Dormady threw for 187 yards and a touchdown on 17 of 27 passing, while John Kelly led the Vols’ ground attack, putting up 101 yards and a touchdown with his 25 carries. Brandon Johnson far and away led Tennessee’s receiving corps, putting up 123 yards on 7 receptions, while Tyler Byrd caught a pair of passes for 21 yards and the team’s lone receiving TD in the win. Defensively, the Vols combined for a whopping 7 sacks, including 2.5 sacks from Colton Jumper as Tennessee held UMASS to just 281 yards of total offense and 3 for 14 on 3rd down in the win.

I won’t lie, I wasn’t very high on Georgia coming into this season, but Fromm, Chubb and co. sure know how to make a guy eat his words as they’ve been just as good as advertised. I thought Tennessee was going to rebound in a big way against UMASS and even though the Vols escaped with a win, they didn’t look like a team that would be able to keep up with Georgia offensively. The underdog has had all of the success over the last couple of years against the spread in this matchup, but I think this is the game where the trend gets bucked, so I’ll lay the touchdown with Georgia here.