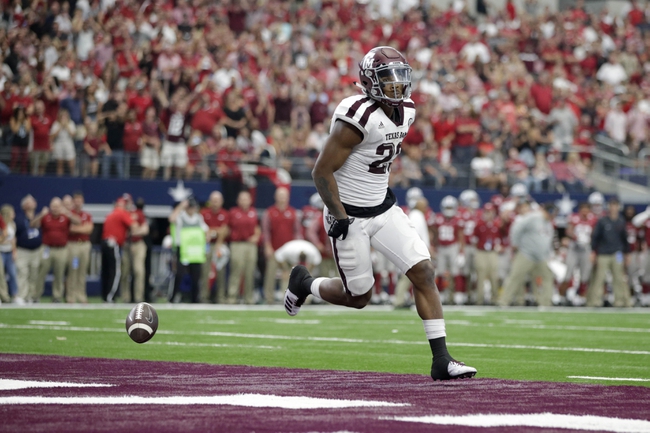 We have some SEC conference action on the gridiron in week 5, as the South Carolina Gamecocks face off against the Texas A&M Aggies from Kyle Field at College Station.

The South Carolina Gamecocks will look to build on their solid 3-1 start to the season, including a 17-16 win over Louisiana Tech in their last outing that saw the Gamecocks come from behind twice, scoring all 17 points in the 4th quarter en route to the victory with a last-second field goal. Jake Bentley threw for 295 yards and a touchdown that was cancelled out by an interception on 22 of 34 passing. Ty’Son Williams racked up 95 yards and a touchdown on his 13 carries while Bryan Edwards led the team with 6 catches for 122 receiving yards. OrTre Smith caught 2 passes for 36 yards and the team’s lone receiving touchdown in the win. Defensively, a Daniel Fennell sack and a Jamarcus King interception highlighted a decent outing from South Carolina, allowing 361 yards of total offense to Louisiana Tech in the win.

The Texas A&M Aggies will also look to build on their strong 3-1 start to the season, winning their SEC opener in overtime by a final score of 50-43 over Arkansas for their 3rd straight victory. Kellen Mond completed 14 of 27 pass attempts for 216 yards, 2 touchdowns and an interception, while also leading the Aggies on the ground with 10 carries for 109 yards. Keith Ford also topped 100 yards, taking 14 carries and turning them into 102 yards and a pair of rushing scores. Trayveon Williams added 72 rushing yards and a touchdown on 17 carries. Christian Kirk led Texas A&M’s receiving corps with 5 catches for 110 yards and both of the team’s receiving touchdowns while Damion Ratley added 57 yards and Jhamon Ausbon added 5 catches of his own in the victory. Defensively, the Aggies combined for 6 sacks, including a pair from Landis Durham, along with an Armani Watts interception, his 3rd pick in his last 2 games.

As nice as the points are with the Gamecocks, South Carolina also lost a game twice that they should’ve had no problems winning. Texas A&M on the other hand, looked at times like they had no business hanging around in the game against Arizona, and managed to sneak out a win and have all the momentum heading into this one, so I can easily see a double-digit victory for the Aggies. Lay the points with Texas A&M here.