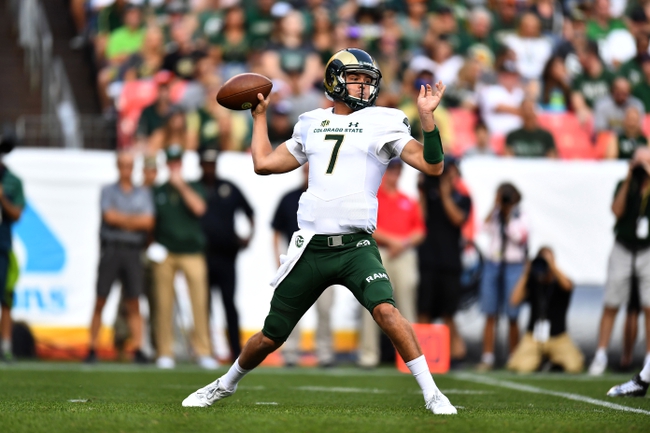 The Colorado State Rams begin their conference schedule with a long trip to oppose the Hawaii Warriors. The Rams dropped to 2-2 on the season following a 41-23 defeat at the Alabama Crimson Tide  as a 31 point road dog. CSU put up a fight but were overmatched with Crimson Tides winning the yardage battle 487-381 while forcing a pair of turnovers. Colorado State knew that running the ball with any kind of consistency would be a struggle and Dalyn Dawkins and his ten carry, 59 yard performance was the highlight of the rushing attack while Izzy Matthews added 47 yards on 16 touches. The Rams did have some success moving the chains through the air with quarterback Nick Stevens connecting on 21-38 for 247 yards and two touchdowns along with a pair of interceptions while adding 26 rushing yards and a score. Michael Gallup paced the CSU receiving corps with 81 yards on five catches with eight players recording receptions.

The Hawaii Warriors are looking for their third win of 2017 when the rival Colorado State Rams pay a visit in week five. The Warriors missed out on a chance on a 3-1 start with a 28-21 overtime defeat at the Wyoming Cowboys as a six point underdog. UH held a huge 450-269 edge in yardage with 13 more first downs and 39 minutes of possession but a pair of turnovers evened the numbers out somewhat. Hawaii was able to do a bit of everything on the offensive side of the football with Diocemy Saint Juste  productive on the ground with 120 yards and a trip to the endzone on 26 carries. Quarterback Dru Brown gave the Warriors a competent passing attack on 29-40 for 280 yards and a touchdown but a pair of interceptions were killers. John Ursua was Hawaii’s star receiver with eight receptions for 102 yards including a 50 yard score. The UH special teams suffered a breakdown that allowed a 97 yard kick return.