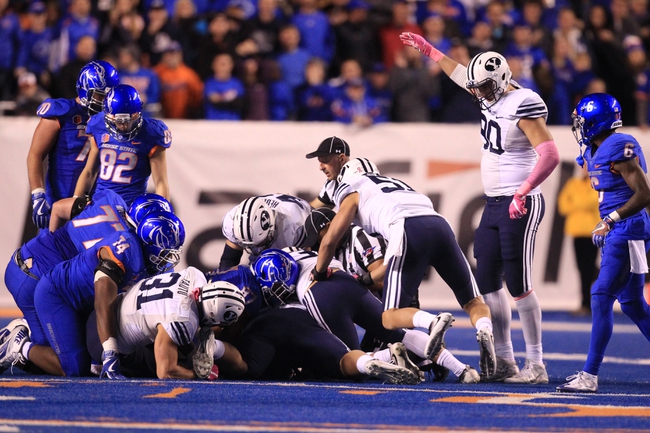 The BYU Cougars are desperate for a bounce back victory to snap a four-game losing streak. The BYU Cougars have won six of their last eight home games. Tanner Mangum is completing 54.4 percent of his passes for 466 yards, two touchdowns and four interceptions. Mangum, Beau Hoge and Koy Detmer Jr. have combined for 10 interceptions this season. Matt Bushman and Talon Shumway have combined for 329 receiving yards on 30 catches while Micah Simon has seven receptions. The BYU Cougars ground game is averaging 104 yards per contest, and Ula Tolutau leads the way with 188 yards and one touchdown. Defensively, BYU is allowing 26.4 points and 381.6 yards per game. Fred Warner leads the BYU Cougars with 41 tackles, Sione Takitaki has 2.5 sacks and Micah Hannemann has one interception.

Boise State has been hit or miss this season, as it hung around with Washington State on the road, but it didn't exactly blowout Troy or New Mexico, and the Broncos are fresh off a beatdown loss against Virginia. BYU isn't as bad as it's record, as the Cougars have played LSU, Utah and Wisconsin, and has had to play with injured quarterbacks who have done nothing but throw interceptions. Cut down on the turnovers and BYU's resume probably looks a little better right now. Either way, the home team has won the last six meetings between these two teams and BYU is well coached, so I expect Sitake to have his guys ready. It will be tough to win this game if Hoge doesn't play, but I can see BYU hang around against a Boise State team that isn't as good as years past. I'd take a shot with the points here.