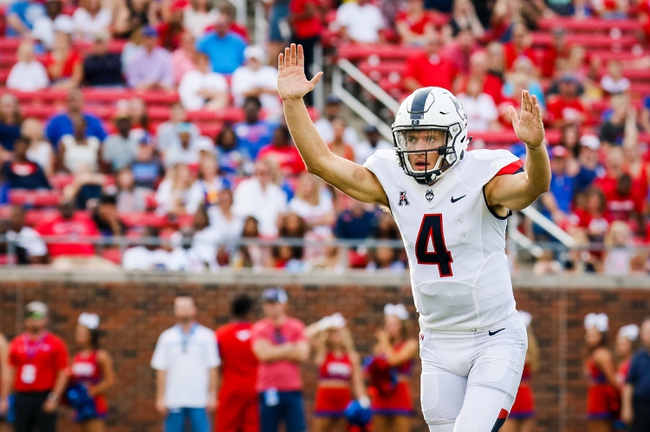 The Memphis Tigers look for their first road victory of the season to build on their 3-1 start. The Memphis Tigers have lost five of their last eight road games. Riley Ferguson is completing 55.4 percent of his passes for 1,104 yards, nine touchdowns and five interceptions. Ferguson has two or less touchdown passes in four of his last eight games. Anthony Miller and Joey Magnifico have combined for 444 receiving yards and five touchdowns while Tony Pollard has seven receptions. The Memphis Tigers ground game is averaging 183 yards per contest, and Darrell Henderson leads the way with 393 yards and three touchdowns. Defensively, Memphis is allowing 36.3 points and 513.5 yards per game. Austin Hall leads the Memphis Tigers with 33 tackles, O'Bryan Goodson has one sack and Terrell Carter has two interceptions.

The UConn Huskies are desperate for a victory here that would snap a three-game losing streak. The UConn Huskies have lost five of their last seven home games. Bryant Shirreffs is completing 68.9 percent of his passes for 1,165 yards, eight touchdowns and two interceptions. Shirreffs has two or more touchdown passes in five of his last eight games. Arkeel Newsome and Aaron McLean have combined for 504 receiving yards and two touchdowns while Hergy Mayala has 11 receptions. The UConn Huskies ground game is averaging 137.2 yards per contest, and Nate Hopkins leads the way with 223 yards and five touchdowns. Defensively, UConn is allowing 37 points and 541.8 yards per game. Junior Joseph leads the UConn Huskies with 33 tackles, Cole Ormsby has three sacks and Tyler Coyle has one interception.

We have a matchup here between two of the worst defenses in college football, as Memphis is 126th in the country in yards allowed per game and UConn is 127th. Memphis has given up no less than 29 points in all four games this season and UConn has allowed a combined 90 points in its last two games. Talk about an over game. As for a side, I'm not sure how you can feel confident laying points in this spot considering there's sure to be a ton of points scored from both sides. While Memphis is the better team and has the best win over UCLA, I'm not giving away two scores when the defense doesn't get off the field. Also, the home team won in blowout fashion in the previous two meetings between these two clubs. Not sure the Huskies can win outright this time around, but it's nice to have free touchdowns in your back pocket in a game where plenty will be scored.