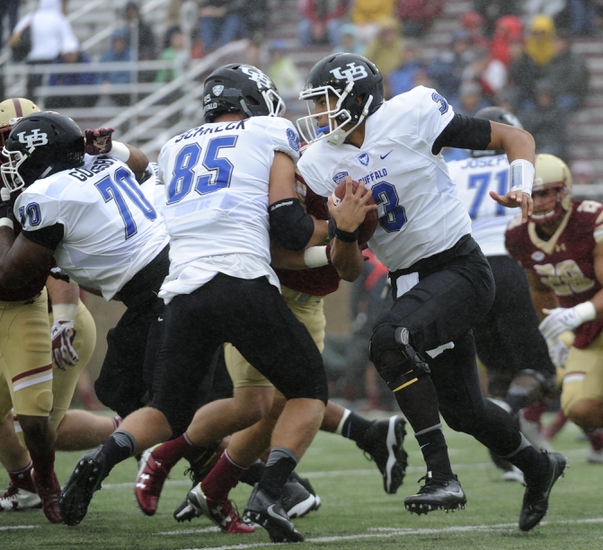 The Western Michigan Broncos visit UB Stadium to face off with the Buffalo Bulls in week six college football action.

The Western Michigan Broncos are shooting for win number four in a row when they visit the rival Buffalo Bulls. The Broncos dominated both sides of the football in a 55-3 rout of the visiting Ball State Cardinals as a 12.5 point favorite.  WMU outgained Ball State 414-238 and played mistake free football while recovering a fumble and picking off a pass. Western Michigan didn’t run the ball well with Jamauri Bogan leading the way with 69 yards on 13 carries while Jarvion Franklin, LeVante Bellamy and Davon Tucker ran for scores. Quarterback Jon Wassink gave the Broncos a productive and efficient passing attack by completing 14-20 fo240 yards  and three touchdowns with Keishawn Watson snagging 12 yard and 52 yard scoring strikes while Donnie Ernsberger grabbing a 22 yard touchdown throw. Obbie Jackson gave the team a 21 yard fumble return to give WMU a quick 7-0 lead.

The Buffalo Bulls need their best effort on both sides of the ball when the surging Western Michigan Broncos come to town in week six. The Bulls overcame the loss of quarterback Tyree Jackson to upend the Kent State Golden Flashes 27-13 as a touchdown road favorite. The Golden Flashes won the yardage battle 444-377 but the UB defense defended the endzone well. Buffalo survived without Jackson by leaning on their ground game with success with Emmanuel Reed rumbling for 144 yards and three touchdowns on 33 carries while backup signal caller Drew Anderson ran for 75 yards on five touches while throwing for 142 yards and a touchdown and interception. Anthony Johnson led the Bulls with 67 yards on four receptions but the team won on defense and the run.

I was leaning towards the points here which I believe would be a solid investment if Jackson was playing and at 100%  but he doesn't look like he's playing...