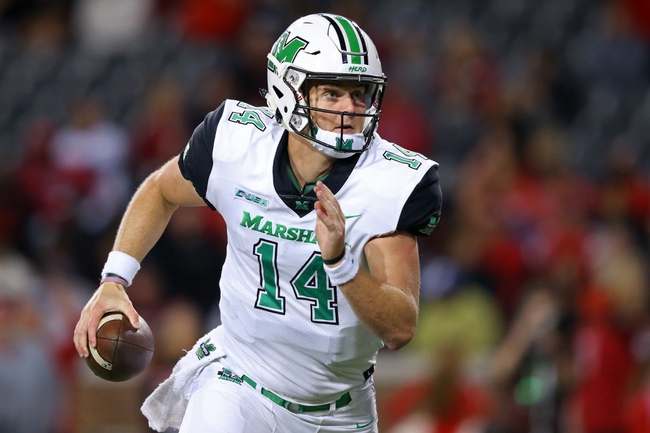 We have some Conference USA action on the gridiron, as the Marshall Thundering Herd take on the Charlotte 49ers in week 6 college football action on Saturday.

The Marshall Thundering Herd will look to take their C-USA opener after starting the season with a 3-1 record after a 38-21 victory over Cincinnati in their last outing. Chase Litton threw for 233 yards and 4 touchdowns on 21 of 34 passing. Keion Davis led the Herd’s ground attack with 93 rushing yards and a touchdown on 20 carries, while Ryan Yurachek led the Marshall receiving corps with 6 catches for 77 yards and 3 TDs. Marcel Williams added 5 receptions for 57 yards, while Willie Johnson added a receiving TD of his own in the win. Defensively, the Herd held Cincy to just 349 yards of total offense, and a 4 for 14 mark on 3rd down, all while dominating the time of possession battle, holding the rock for almost two-thirds of the game with just over 39 minutes of possession in the win.

The Charlotte 49ers will look for their first win of the season after falling to 0-5 and 0-1 in C-USA play after a heartbreaking 30-29 loss to FIU in their last outing. Hasaan Klugh threw for 155 yards and a touchdown on 16 of 28 passing, while also racking up 107 yards and 3 rushing TDs on 15 carries. Benny LeMay led the 49ers ground game with 22 carries for 178 yards, while Aaron Mcallister added 64 yards on 12 carries. Trent Bostick led the team with 36 receiving yards while R.J. Tyler notched a team-high 4 receptions and the aforementioned LeMay added a receiving touchdown out of the backfield. Defensively, a Juwan Foggie interception was the lone highlight in an otherwise frustrating defensive outing, as the 49ers outgained the Panthers 504-475 on offense and won the T.O.P. battle, holding the rock for just under 34 minutes and still falling short.

This is a dangerous line to me, as both teams have won one of the two prior meetings, but the difference here is that Marshall has been getting it done straight up and against the spread, while Charlotte just keeps finding ways to lose. Granted FIU looks like a better team under Butch Davis, but Marshall is playing well beyond expectations and that’s enough to give them the nod against a struggling Charlotte team. Lay the points with the Herd in this one.