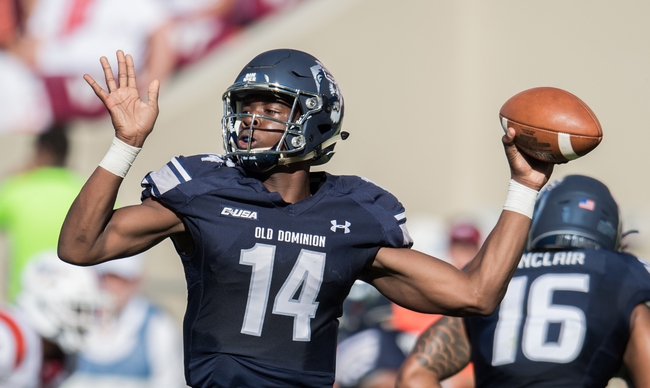 Coming up from Foreman Field in Norfolk on Saturday, the Florida Atlantic Owls will be visiting the Old Dominion Monarchs in college football action.

The Owls are currently 2-3 on the year, recording losses to Navy, Wisconsin and Buffalo with wins over Bethune-Cookman and Middle Tennessee. In that Middle Tennessee game, Owls QB Jason Driskel went 22-of-29 for 187 yards and one TD, but Devin Singletary had the biggest impact with his 24 carries, 133 yards and four touchdowns.

So far this season, Driskel has put up 352 yards on his 43-of-64 passing with one TD and one interception, while Singletary leads FAU in rushing on 80 carries, 492 yards and nine touchdowns. DeAndre McNeal is the top Owls receiver with his 21 catches, 318 yards and two touchdowns.

Over on the Old Dominion side, they’re sitting at 2-2 on the season, opening up the year with wins over Albany and UMass before defeats by North Carolina and Virginia Tech. In that Hokies game, Old Dominion QB Steven Williams went just 8-of-26 for 85 yards and a pick, also leading the team in rushing on 24 yards from six carries.

Williams has put up 224 yards, two touchdowns and an interception on 17-of-46 passing this year, and Jeremy Cox leads the Monarchs with 65 carries and 177 yards on the ground. Travis Fulgham is the leading Old Dominion receiver with his 11 receptions, 196 yards and one TD.

Driskel has shown some promise for FAU so far, as he’s completing passes at a 67.2 percent clip. The one passing touchdown isn’t blowing anyone’s mind, but with Singletary behind him no one will blame Driskel for handing it off. The Monarchs don’t have that option, as Cox is averaging a dismal 2.7 YPC with a long run of 17. The major weapons for the Monarchs are their three top receivers (of which Cox is one, along with Fulgham and Jonathan Duhart), but that doesn’t matter much with Williams’ 37.0 completion percentage. He’ll get better, but it’ll take some time. I’ll take FAU for the cover here.