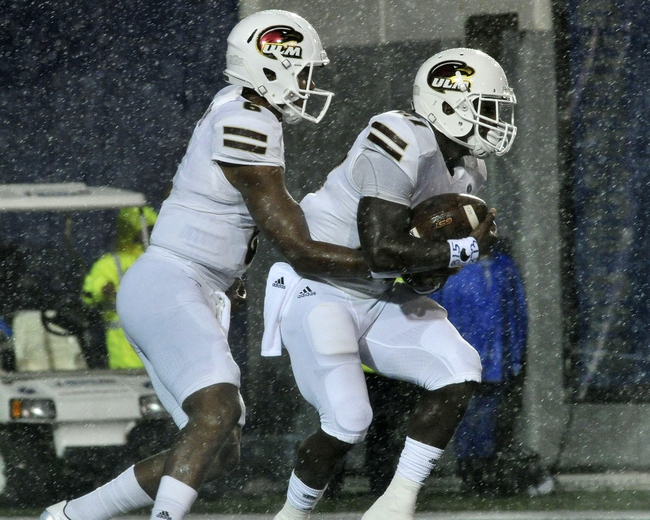 The Louisiana Monroe Warhawks will travel to Bobcat Stadium (TX) to take on the Texas State Bobcats this Saturday afternoon in College Football action.

The Louisiana Monroe Warhawks won their 2nd straight game and improved to 2-2 (2-0 Sun Belt) on the season after defeating the Coastal Carolina Chanticleers, 51-43, this past Saturday. Louisiana Monroe was outgained by Coastal Carolina however, got some big plays from their defense that allowed the Warhawks to come away with the victory. Louisiana Monroe was outgained by Coastal Carolina by a 441-344 margin and won the turnover battle by a 3-0 margin. Leading the way for the Warhawks was the backfield duo of Ben Luckett and Derrick Gore who combined for 201 rushing yards and 4 TD’s on 29 carries. On the season, Louisiana Monroe is averaging 38.3 ppg on 423.0 total yards per game (208.8 passing yds/g; 214.3 rushing yds/g). Offensively, Louisiana Monroe has been led by QB Caleb Evans who has completed 63.0% of his passes for 3 TD and 0 INT while averaging 151.0 passing yds/g. Evans is also the 2nd leading rusher for the Warhawks, averaging 58.5 rushing yds/g, while also rushing for 7 TD’s. In the backfield with Evans is RB Derrick Gore who has 5 TD’s while averaging 72.0 yds/g on 19.5 att/g. The leading receivers for the Warhawks have been Marcus Green (3.8 rec/g, 44.3 yds/g, TD) and Markis McCray (2.3 rec/g, 31.3 yds/g). Defensively, Louisiana Monroe is allowing their opponents to average 31.4 ppg on 374.6 total yards per game (233.2 passing yds/g; 141.4 rushing yds/g).

Louisiana Monroe has opened up conference play, 2-0, this season and has combined for 107 points in those victories, however, comes into this game with a scoring defense that is ranked 121st. Texas State has really struggled on the offensive end this season and come into this matchup ranked 127th. Louisiana Monroe was competitive in both their losses against Memphis and Southern Mississippi and although I feel that the Texas State offense will score a few points on the Warhawks, I think the Louisiana Monroe offense continues to put up points and does enough to cover this road spread.