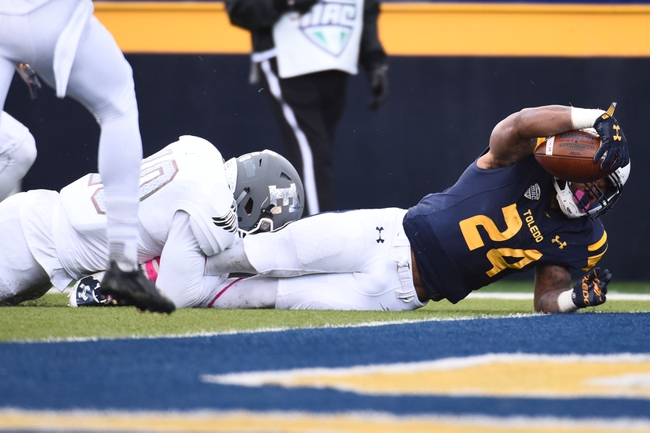 College football comes to the Glass Bowl when the Toledo Rockets welcome the Eastern Michigan Eagles to town.

The Eastern Michigan Eagles face a tough week six assignment in a trip to face the Toledo Rockets. The Eagles look to avoid a three game skid following a 24-20 defeat at the Kentucky Wildcats as a two touchdown underdog. EMU outgained the Wildcats 312-228 but three turnovers cost the team a winnable road game against an SEC opponent. Eastern Michigan was not able to move the football on the ground with Ian Eriksen logging just 40 yards on 18 carries with a two yard touchdown late in the 4th quarter while catching four passes for 56 yards. The Eagles were forced to throw more then they wanted with quarterback Brogan Roback connecting on 26-43 with a touchdown and a pair of interceptions. Sergio Bailey was the top Eagles receiver with eight receptions for 80 yards including a 20 yard scoring catch.

The Toledo Rockets look to get back in the win column with the Eastern Michigan Eagles paying a visit on Saturday. The Rockets dropped their first game of the season in a 52-30 defeat at the Miami Hurricanes where the defense couldn’t get stops in the second half. Toledo were up 16-10 at the half but were outscored 42-14 in the second half. The Hurricanes racked up a 587-446  yardage advantage and forced Toledo to become one dimensional with no running game to depend on. The Rockets were no threat on the ground with a 20 carry, 79 yard effort from quarterback Logan Woodside being the only being the extent of the rushing attack. Logan Woodside did give the Rockets a solid game in the air by connecting on 28-48 for 342 yards and three touchdowns. Cody Thompson was the top Toledo receiver with five catches for 114 yards while Jon’Vea Johnson and Dionte Johnson combining for 13 receptions for 144 yards and three scores.