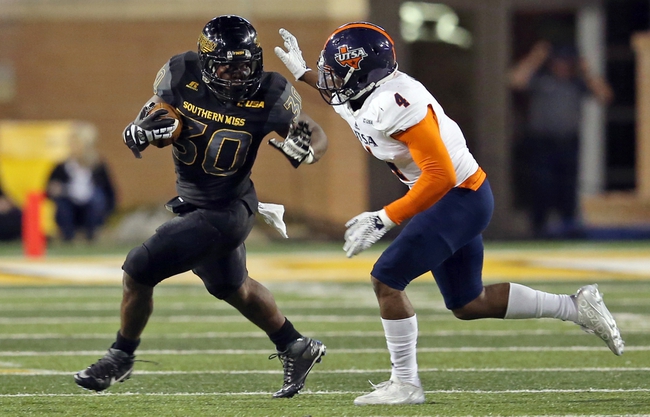 Week six college football can be found at the Alamodome where the UTSA Roadrunners host the Southern Miss Golden Eagles.

The Southern Mississippi Golden Eagles head out on the road to battle the UTSA Roadrunners. The Golden Eagles saw their two game winning streak end in a 43-28 loss to the visiting North Texas Mean Green on Saturday. USM led 21-17 at the intermission but were outscored 26-7 over the final 30 minutes as the Mean Green piled up a 540-415 yardage edge and controlled the football for over 36 minutes. The Golden Eagles had some success on the ground behind Ito Smith with 102 yards and four yard and 63 yard scoring runs on 13 touches while catching two passes for another 47 yards. Quarterback Kwadra Griggs threw for 270 yards but connected on just 19-42 and a touchdown while Allen Staggers led the Southern Miss receiving corps with five receptions for 112 yards and a touchdown.

The UTSA Roadrunners hope to continue their hot start against the visiting Southern Miss Golden Eagles in week six. The Roadrunners have been dependable on both sides of the ball and that trend continued in a 44-14 win versus the Texas State Bobcats to begin the season 3-0. UTSA held the Bobcats to just under 200 yards while amassing 569 yards and 35+ minutes of possession. Jalen Rhodes led a potent Texas-San Antonio rushing game with 174 yards and a pair of touchdowns on 15 touches with Tyrell Clay added 72 yards and a score on 13 tries while Brent Winnegan raced 71 yards for another TD. Dalton Sturm gave the Roadrunners a solid passing game with a 17-25 effort for 212 yards with Brady Jones logging three catches for 75 yards.