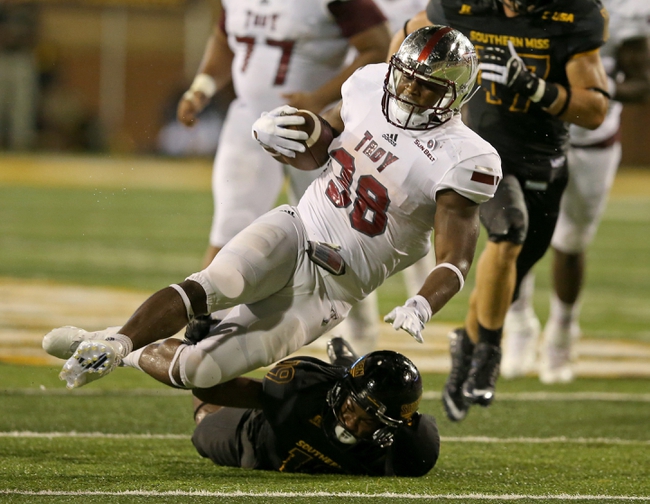 The South Alabama Jaguars visit the Troy Trojans in search of their second win of the season. South Alabama comes off of a 34-16 defeat at the Louisiana Tech Bulldogs where both sides of the football struggled I dropping their record to 1-4. USA trailed just 17-16 after three quarters before the Bulldogs took control with a 17-0  run. South Alabama was outgained 479-333 and gave  the ball away twice while committing seven penalties. Xavier Johnson gave the Jaguars some decent yardage on the ground with 89 yards on 12 touches but the offense didn’t run much. USA turned to quarterback Cole Garvin more often then not and he connected on 21-45 for 235 yards and a touchdown along  with a pair of interceptions. Jamarius Way gave the Jaguars five catches for 67 yards  including a 29 yard TD that gave the team a 7-0 lead.

The Troy Trojans are looking for win number five in a row when the team welcomes the South Alabama Jaguars to town on Wednesday. Troy comes off of one of the biggest upsets in program history in a 24-21 victory at the LSU Tigers as nearly a three touchdown underdog. The Trojans led 24-7 before a 4th quarter Tigers rally fell short. LSU won the yardage battle 428-363 but the Trojans won the turnover battle 4-2 which was the difference. Quarterback Brandon Silvers gave Troy a short but effective passing attack by completing 16-28 for 157 yards and zero turnovers while adding a short scoring run. Jordan Chunn was the Trojans offensive star with  191 rushing yards including a one yard score on a 30 carry performance. Deondre Douglas and Emmanuel Thompson led the Trojans receiving corps with three receptions apiece for a combined 89 yards. Both sides of the ball contributed for Troy with the defense forcing mistakes and the offense taking advantage.