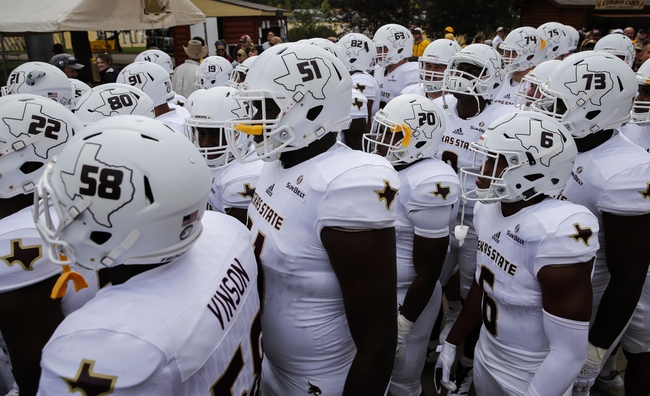 The Texas State Bobcats go on the road to face the Louisiana-Lafayette Ragin’ Cajuns in a college football matchup on Thursday.

The Texas State Bobcats look to right the ship when the team goes on the road to oppose the Louisiana-Lafayette Ragin’ Cajuns. Texas State ha been struggling and those struggles continued in a 45-27 loss to the visiting UL Monroe Warhawks as a six point underdog.  The Warhawks won the yardage war 589-386 with over 400 passing yards while the Bobcats didn’t move the chains consistently after a 20 point first quarter. Anthony Taylor was the top Bobcats runner with 102 yards on 15 carries while also leading the team in receiving with three receptions for 52 yards and a touchdown followed by Tyler Watts who added a 24 yard run and caught two balls for 29 yards and a score. The Bobcats employed a short passing attack with quarterback Damian Williams completing 13-24 for 158 yards and a touchdown and no turnovers.

The Louisiana-Lafayette Ragin’ Cajuns take the field with the rival Texas State Bobcats on Saturday. UL Lafayette is looking for consecutive victories after downing the Idaho Vandals 21-16 as a six point road underdog. This game was as even as the boxscore with ULL holding a small 297-278 yardage edge. Trey Ragas was the only Louisiana-Lafayette runner of note with 78 yards on 17 touches and a one touchdown. The Ragin’ Cajuns relied on the passing of Andre Nunez who didn’t disappoint as he connected on 18-24 for 213 yards and a touchdown and interception. Ja’Marcus Bradley paced the UL Lafayette receiving corps with five receptions for 93 yards including a 45 yard scoring strike followed by Ryheem Malone caught five balls for 80 yards.