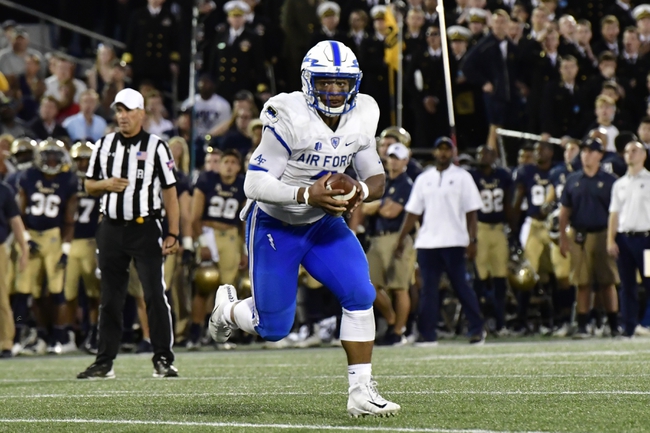 The UNLV Rebels are hoping to string a few wins together beginning with a trip to the Air Force Falcons. UNLV comes in off of a 41-10 defeat versus the visiting San Diego State Aztecs as an eight point underdog to fall to 2-3. The Rebels were competitive for a half but were outscored 21-0 over the final 30 minutes. San Diego State won the yardage battle 474-283 with a run heavy attack while the Rebels held the ball for under 26 minutes and struggled in the air and on the ground. Lexington Thomas and Armani Rogers gave UNLV 108 rushing yards on 29 carries while Rogers completed 12-27 for 177 yards and a touchdown. Brandon Presley caught three throws for 77 yards to lead the receiving corps while Kendal Keys caught a six yard scoring pass.

The Air Force Falcons look to break out of a month long slump when the UNLV Rebels pay a visit. Air Force have dropped four in a row following a 48-45 loss at the Navy Midshipmen as an eight point underdog. The Falcons rallied from an 18 point deficit at the half behind a 35-10 second half run that just fell short with Navy scoring a touchdown with 15 seconds remaining. AFA allowed 557 yards and countered with 621 yards with three fumbles with two recovered by the Middies. Quarterback Arion Worthman gave the Falcons an explosive passing attack on 9-16 for 257 yards and a pair of touchdowns. Worthman led the Falcons on the ground with 139  yards and a pair of trips to the end zone on 20 touches while Marcus Bennett hauled in 51 yard and 59 yard scoring strikes.

This might be a bad spot for Air Force after a disappointing loss at Navy but their season is on the line. For now I’ll back the Falcons…