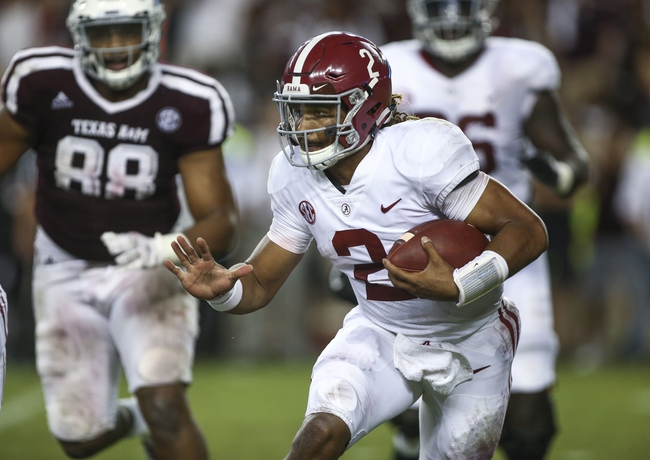 The Arkansas Razorbacks head to Bryant-Denny Stadium to take on the #1 Alabama Crimson Tide in college football action on Saturday.

The Arkansas Razorbacks will look to bounce back after falling to 2-3 this season and 0-2 in SEC conference play after a 48-22 thrashing at the hands of South Carolina. Austin Allen threw for just 84 yards on 12 of 24 passing with a touchdown and an interception, while Cole Kelley added a TD pass and a pick of his own, going 8 of 13 for 140 yards. David Williams led the Hogs with 32 yards and a touchdown on his 7 carries, while Chase Hayden took his team-high 9 carries and turned them into 28 yards. Jonathan Nance led Arkansas with 8 receptions for 116 yards and a touchdown, while Jordan Jones added 3 catches for 37 yards and a score, while Deon Stewart chipped in 3 receptions of his own. Defensively, a Randy Ramsey sack was the lone highlight as Arkansas gave up 358 yards of total offense in the loss.

The #1 Alabama Crimson Tide will look to remain unbeaten after improving to 5-0 overall and 3-0 in SEC play after hanging on to win their game against Texas A&M by a final score of 27-19. Jalen Hurts threw for 123 yards and a touchdown on 13 of 22 passing, while also chipping in 56 rushing yards and a touchdown on 12 carries. Damien Harris led the ground attack with 14 carries of his own for 124 yards and a touchdown, while Bo Scarbrough added 55 rushing yards with his team-high 15 carries. Calvin Ridley led the team with 5 catches for 68 yards, while Scarbrough added 3 receptions out of the backfield and Henry Ruggs III caught the team’s lone receiving score in the win. On defense, the Tide combined for 4 sacks, a pair of fumble recoveries and an interception, all while holding the Aggies to just 308 yards of total offense and a 3 for 14 mark on 3rd down in the win.

Both of these teams burned me last week, but as far as this week goes, I’m done with backing Arkansas, as they’ve failed to cover a single spread this season. Alabama at least has the ability to put enough points on the board to cover, which is something that I’m not sure the Razorbacks are capable of doing right now, so I’ll lay the points with ‘Bama here.