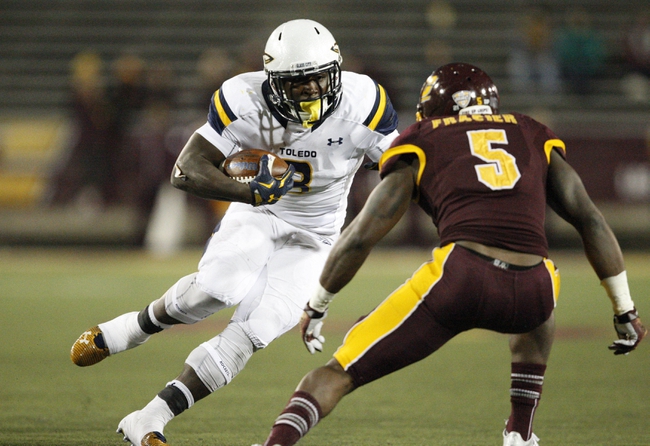 We have some MAC-tion on the college football slate on Saturday afternoon, as the Toledo Rockets pay a visit to the Central Michigan Chippewas.

The Toledo Rockets will look to build on their solid 4-1 start after winning their MAC conference opener by a final score of 20-15 over Eastern Michigan. Logan Woodside led the Rockets under center, going 23 of 34 for 289 yards in the win. Art Thompkins led the team with 94 rushing yards and a touchdown on 15 carries, while Shakif Seymour added 55 yards and a touchdown on 17 carries of his own. Diontae Johnson led the team with 8 catches for 97 yards, while Danzel McKinley-Lewis added 4 catches and 61 yards of his own in the winning effort. Defensively, a pair of Khalil Robinson sacks highlighted a solid effort from Toledo, as they held Eastern Michigan to 326 yards of total offense and just 1 for 11 on 3rd down while dominating the time of possession battle, holding onto the rock for over 35 minutes in the win.

The Central Michigan Chippewas will look to build some momentum after snapping their 3-game losing streak with a 26-23 victory over Ohio to improve to 3-3 this season and 1-1 in MAC play. Shane Morrie racked up 249 yards, 2 touchdowns and an interception on 25 of 35 passing. Tony Poljan led a weak effort from the CMU ground attack, taking 5 carries and turning them into a team-high 24 rushing yards, while Kumehnnu Gwilly took a team-high 8 carries and flipped them into just 17 rushing yards. Tyler Conklin haule in 10 balls for 136 yards and both of Central Michigan’s TD grabs in the win, while Mark Chapman and Jonathan Ward each caught 6 passes apiece. Defensively, CMU combined for a pair of sacks and an interception, despite being outgained 350-317 and allowing Ohio to put up a 10 for 15 mark on 3rd down in the win.