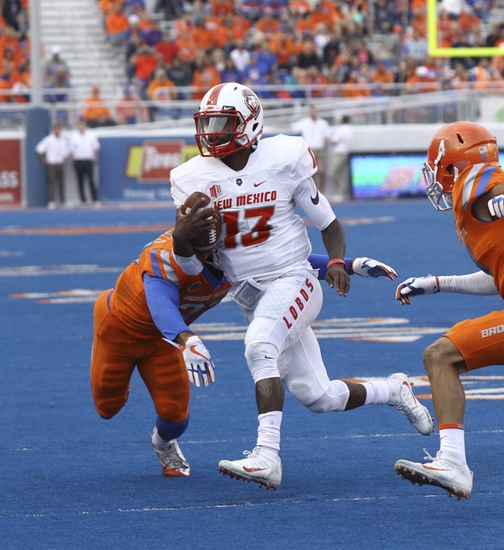 The New Mexico Lobos travel to Bulldog Stadium for a college football tilt with the Fresno State Bulldogs.

The New Mexico Lobos are hoping for a third straight victory when the team visits the Fresno State Bulldogs. New  Mexico headed in to their bye week on a positive note with a 56-38 win versus the Air Force Falcons as a field goal home dog to improve to 3-2. A 42 point second half run did the trick as UNM rolled up a 509-396 edge in yards while averaging nearly nine yards per attempt on the ground. New Mexico quarterback Lamar Jordan hit 4-9 for 146 yards and a pair of touchdowns with Delane Hart- Johnson hauling in a 49 yard TD while Jay Griffin IV snagged a 71 yard scoring strike. The Lobos were just as explosive on the ground with Richard McQuarley ripping off 179 yards and five touchdowns on eleven touches while Tyrone Owens and Hunt combined for another 152 yards on 26 tries.

The Fresno State Bulldogs have a third consecutive victory lined up with New Mexico Lobos taking the field Saturday. Fresno State upped their record to 3-2 following a 27-10 win at the San Jose State Spartans as a 17 point road favorite. The Bulldogs were never in danger as the team led 21-0 heading in to the intermission which essentially ended it. Fresno led 348-205 in yards with two fumble recoveries and a pair of interceptions which led the way to 37 minutes of possession. Bulldogs quarterback Marcus McMaryion completed 15-26 for 136 yards which moved the chains a bit and ate clock with KeeShawn Johnson catching two balls for 52 yards. Ronnie Rivers was the top Fresno State runner with 105 yards and a pair of scores on 19 touches as the game was shortened favorably for the Bulldogs.