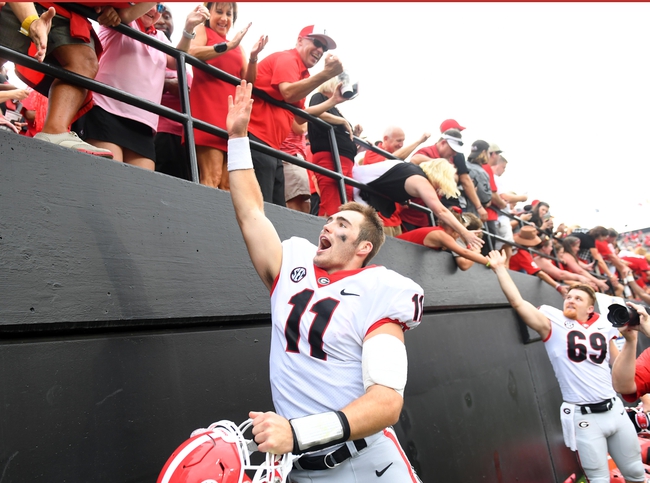 We have SEC Conference action on the schedule as the Missouri Tigers take on the #4 Georgia Bulldogs in college football action on Saturday evening.

The Missouri Tigers will look to bounce back after dropping their last four games to fall to 1-4 this season, including an 0-2 mark in SEC play this season following a 40-34 loss to Kentucky in their last outing. Drew Lock completed 22 of his 42 pass attempts for 355 yards and 3 touchdowns, while also rushing for a score as well. Ish Witter led the team with 17 carries for 139 yards, while Damarea Crockett logged 12 carries for 74 yards. Emanuel Hall led the way with 129 yards receiving and a touchdown on 4 receptions, while Johnathon Johnson added 6 catches for 97 yards and a touchdown, and J’Mon Moore caught a team-high 7 passes for 86 yards and a TD. Markell Utsey added a sack and Cale Garrett logged an interception as Mizzou allowed 486 yards of total offense while being dominated in time of possession battle as Missouri’s D was on the field for over 36 minutes in the loss.

The #4 Georgia Bulldogs finally cracked the top-4 spots after getting some help and improving to 6-0 this season and 3-0 in SEC play this season after a 45-14 dismantling of Tennessee in their last outing. Jake Fromm threw for 102 yards and a pair of TDs on 7 of 11 passing, while Sony Michel and Nick Chubb combined for 288 rushing yards on 28 carries with 3 touchdowns out of the backfield. Elijah Holyfield also contributed 51 yards and a touchdown on 7 carries, while Terry Godwin led the Bulldogs with a pair of catches for 70 yards and a touchdown grab. D’Andre Swift added a pair of catches and a touchdown of his own, while Javon Wims and Ahkil Crumpton each hauled in 2 balls in the win. It was a strong outing for Georgia defensively, as the Commodores were held to just 236 yards of total offense in the Georgia W.

Missouri put forth a strong outing against Kentucky, but the Wildcats are a tier far below what Georgia has put out this season. Georgia has won their 3 SEC games by a combined score of 117-17, while Mizzou has allowed 31 points or more in each of their 5 games this season, including 43 in their season opener to Missouri State. Lock is a solid QB, but I just can’t see Missouri making the plays needed to at least keep this one close.