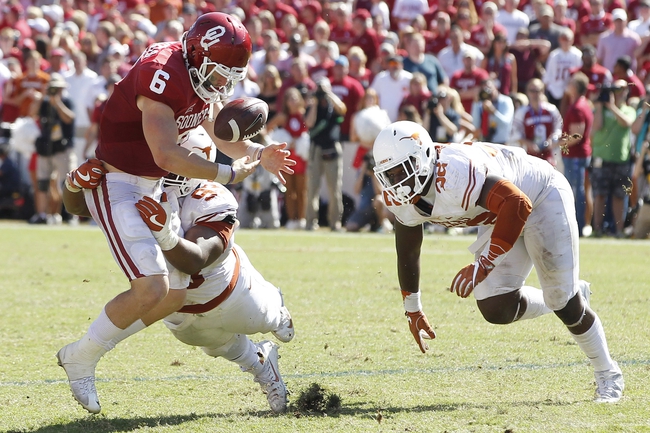 The Oklahoma Sooners and Texas Longhorns meet Saturday in college football action at the Cotton Bowl on ESPN.

The Oklahoma Sooners look to bounce back after a brutal home loss to the Iowa State Cyclones last week. The Oklahoma Sooners have lost three of their last five neutral site games. Baker Mayfield is completing 74.6 percent of his passes for 1,635 yards, 15 touchdowns and zero interceptions. Mayfield has two or more touchdown passes in 18 straight games. Mark Andrews and CeeDee Lamb have combined for 662 receiving yards and six touchdowns while Dimitri Flowers has 16 receptions. The Oklahoma Sooners ground game is averaging 202.6 yards per contest, and Trey Sermon leads the way with 373 yards and three touchdowns. Defensively, Oklahoma is allowing 23.2 points and 356 yards per game. Emmanuel Beal leads the Oklahoma Sooners with 36 tackles, Ogbonnia Okoronkwo has five sacks and Parnell Motley has two interceptions.

The Texas Longhorns look to make a statement in the Big 12 with what would be their third straight victory. The Texas Longhorns have lost four of their last five neutral site games. Sam Ehlinger is completing 56.4 percent of his passes for 900 yards, five touchdowns and three interceptions. Shane Buechele and Ehlinger have combined for eight touchdown passes and five interceptions this season. Collin Johnson and Reggie Hemphill-Mapps have combined for 746 receiving yards and one touchdown while Armanti Foreman has 17 receptions. The Texas Longhorns ground game is averaging 175.8 yards per contest, and Chris Warren III leads the way with 270 yards and four touchdowns. Defensively, Texas is allowing 23.8 points and 354.2 yards per game. Malik Jefferson leads the Texas Longhorns with 43 tackles, Charles Omenihu has two sacks and DeShon Elliott has five interceptions.

In rivalry games like this you can usually throw the records and the numbers out the window, which is why Texas has won two of the last four meetings despite being double-digit underdogs. These teams don't like each other and everybody shows up to put on the best performance possible. While everybody is talking about Oklahoma's loss last week, the Sooners also let a bad Baylor team hang around a couple weeks previously, so they've shown some weakness as of late. Texas' defense has improved over the course of the season and the offense is coming off its best showing when it dropped 40 points on Kansas State. The Longhorns also beat the same Iowa State team on the road that Oklahoma lost to at home. Tom Herman also has an insane track record of getting his team ready and covering (and or winning outright) as an underdog. Also, just when I'm ready to trust Oklahoma as a legit contender, they let me down every year. Throw in the history between these two clubs, and I'll take my free touchdown.