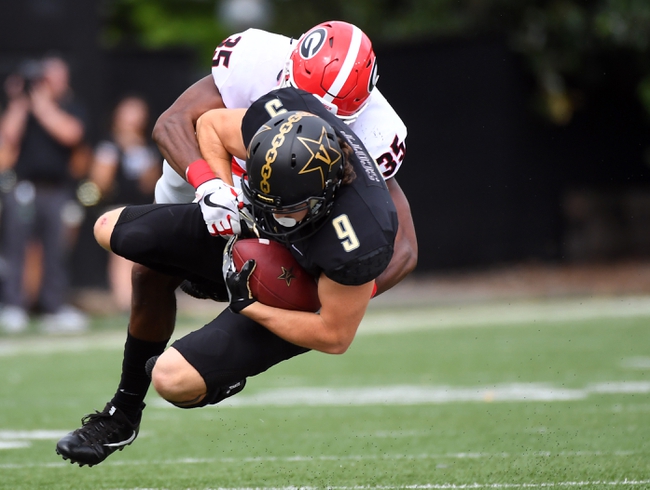 The Vanderbilt Commodores and the Ole Miss Rebels do battle in SEC action on the gridiron in a week 7 college football matchup.

The Vanderbilt Commodores are still hunting for their first conference victory of the year after being dismantled 45-14 at the hands of then #5 Georgia, falling to 3-3 this season and 0-3 in SEC play. Kyle Shurmur threw for 172 yards and a touchdown on 17 of 31 passing, while Ralph Webb racked up 47 rushing yards and a touchdown on 12 carries to lead the Vandy ground attack. Kalija Lipscomb led Vanderbilt with 55 receiving yards on 3 receptions, while Trent Sherfield, Caleb Scott and C.J. Duncan all caught a team-leading 4 passes in the loss, with Duncan also contributing a TD grab for the ‘Dores. Defensively, a pair of sacks were the lone highlights in an otherwise disappointing outing for the Vanderbilt D, as they gave up 549 yards of total offense to Georgia, including a whopping 423 yards rushing while also letting Georgia hold the rock for over 34 minutes in the time of possession battle.

The Ole Miss Rebels will also be looking for their first SEC win that would snap a 3-game losing streak after a 44-23 loss to then #12 Auburn dropped the Rebels to 2-3 this season and 0-2 in SEC play. Shea Patterson completed 34 of his 51 pass attempts for 346 yards and 2 touchdowns. Jordan Wilkins led Ole Miss with 65 rushing yards and a touchdown on 13 carries, while A.J. Brown led the Rebels’ receiving corps with 10 catches for 109 yards. Van Jefferson added 8 catches for 89 yards, while D.K. Metcalf caught 4 passes, including both of Ole Miss’ TD receptions in the loss. Defensively, a Marquis Haynes sack was the lone highlight for the Rebels as Auburn put up a massive 561 yards of total offense on Ole Miss.

Both of these teams have a lot in common. Both haven’t had any luck in conference so far, both were also trounced by Alabama in their respective games against the Tide. Now Ole Miss may have sucked out a backdoor push against Auburn in their last outing, but Vanderbilt has had the bulk of the success against the spread, especially in the Rebels’ backyard. Plus, Ole Miss has had zero success against the spread this season, so while I wouldn’t be surprised if Ole Miss bucked the trend and got a win and cover here, I think the points with Vanderbilt is the way to go here.