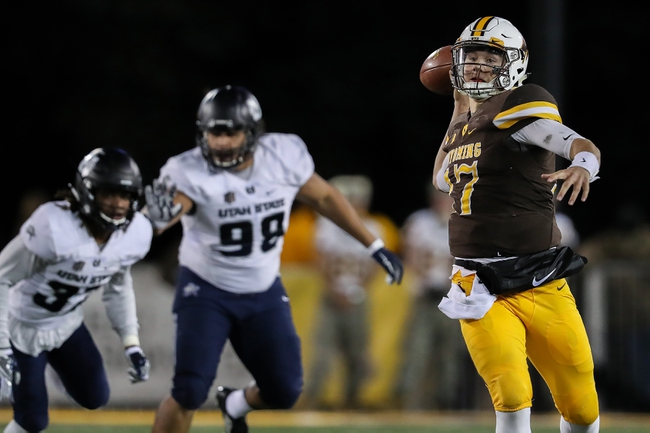 The Utah State Aggies get a visit from the Wyoming Cowboys in in a MWC college football matchup.

The Wyoming Cowboys come out of their bye week to face the rival Utah State Aggies on the road in week seven. Wyoming is gunning for their third consecutive victory after routing the Texas State Bobcats 45-10. The Cowboys scored 31 second quarter points and were never challenged with contributions from the defensive side of the football and special teams. Wyoming held a 333-262 yardage edge with an 18 yard fumble return for six and a 95 yard kick return from Tyler Hall supplementing the scoring. The Cowboys were not effective on the ground with Trey Woods totaling 53 yards on 20 carries. Josh Allen gave Wyoming all the offense needed through the air with Josh Allen connecting on 14-24 for 219 yards and three touchdowns and a pick six. CJ Johnson topped the Cowboys in receiving with 57 yards on four catches and a pair of touchdowns.

The Utah State Aggies are trying to stay afloat in the MWC with the Wyoming Cowboys coming to town. Utah State fell to 3-3 on the year following a 27-14 loss to the visiting Colorado State Rams where a 17-0 first quarter deficit could not be overcome. The Rams rolled up over 500 yards of offense and held the football for over 37 minutes but the Aggies struggled to move the chains with 212 yards and 14 first downs. This was a game USU really needed to run the football effectively but that didn’t happen with the twosome of LaJuan Hunt and Eltoro Allen combining for 37 yards on 12 carries. Kent Myers gave the Aggies a short passing game that saw him complete 17-29 for 152 yards and a 22 yard touchdown strike to LaJuan Hunt. The Utah State defense scored as well with DJ Nelson returning a blocked punt 20 yards for a touchdown.