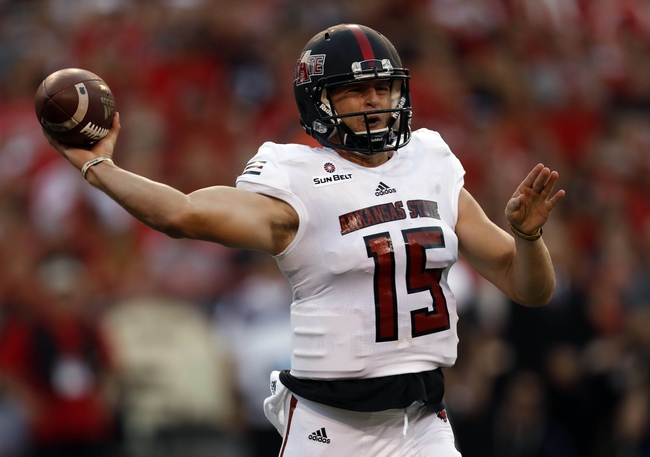 On Thursday down at Centennial Bank Stadium in Jonesboro, the Louisiana-Lafayette Ragin’ Cajuns will be taking on the Arkansas State Red Wolves in college football action.

UL Lafayette comes into this game with a 3-3 record so far, recording losses to Tulsa, Texas A&M and UL Monroe along with wins over SE Louisiana, Idaho and Texas State. In that Texas State game, Cajuns QB Andre Nunez posted 232 yards and a TD in his first start, while Trey Ragas logged 72 yards and two TDs.

So far this year, Nunez has 732 yards, four scores and a pick, while Ragas leads the UL Lafayette rush with 82 carries, 525 yards and seven TDs. Keenan Barnes is the Ragin’ Cajuns top receiver with 31 catches for 434 yards and two touchdowns.

Over on the Arkansas State side, they’re coming in at 3-2 so far after losses to Nebraska and SMU with wins over AR-Pine Bluff, Georgia Southern and Coastal Carolina (and a canceled game against Miami). In that Coastal Carolina game, Red Wolves QB Justice Hansen went off for 286 yards and five touchdowns, also leading the team in rushing with 68 yards on nine carries.

On the season so far, Hanesn has 1587 yards, 19 touchdowns and six picks, while Warren Wand is the top dog for the Red Wolves rushing attack on 49 carries, 285 yards and four scores. Chris Murray is the Arkansas State leading receiver with 21 catches for 347 yards and four touchdowns.

After giving up at least 45 points in each of their first four games, the UL Lafayette defense has tightened the defensive screws to the tune of 23 points combined over their last two. As for Arkansas State, they’ve scored at least 43 points in three of their last four and allowed 42 combined points over their last two. I would imagine this to be an Arkansas State cover, but the sensible play here is probably the over.