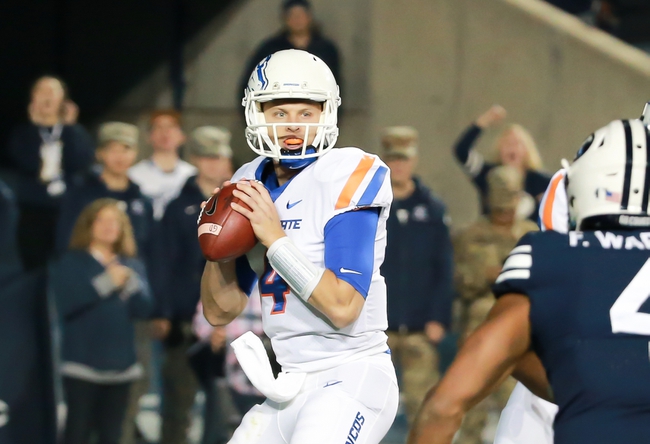 We have some Mountain West conference action on the gridiron as the Wyoming Cowboys duke it out against the Boise State Broncos in week 8 college football action from Albertsons Stadium.

The Wyoming Cowboys come into this one looking to stay unbeaten in conference play after improving to 4-2 this season with a 28-23 win over Utah State in their last outing, pushing Wyoming to 2-0 in MW play this season. Josh Allen threw for 208 yards, a touchdown and an interception on 18 of 26 passing, while also calling his own number 16 times for 36 yards and a touchdown on the ground. Trey Woods led the Wyoming ground attack with 40 rushing yards on his 15 carries, while James Price led the team with 4 receptions for 72 yards and C.J. Johnson’s lone reception was a 28-yard touchdown grab. Defensively, Andrew Wingard led the team with 10 tackles, while the Cowboys combined for 3 sacks and 3 interceptions, including a 28-yard pick-six from Kevin Prosser along with a safety to close out the game late in the 4th.

The Boise State Broncos will also look to remain unbeaten in MW play, improving to 2-0 in conference and 4-2 overall with a solid 31-14 road win over then #19 San Diego State. Brett Rypien and Montell Cozart combined to go 14 of 23 for 125 yards with Rypien tossing a touchdown pass as well. Alexander Mattison took his 23 carries and spun them into 128 rushing yards and a touchdown, while Cedrick Wilson led the team with 60 receiving yards and Jake Roh caught a team-high 6 passes including the team’s lone receiving score in the win. Boise State’s first 14 points came by way of a 53-yard punt return TD from Avery Williams and a Kekaula Kaniho 34-yard fumble rumble for 6 as part of a solid defensive showing from the Broncos that saw Boise State combine for 4 sacks, while holding Aztecs’ star running back Rashaad Penny to just 53 yards on the ground.

The Broncos are surely feeling themselves right now after going on the road and taking down San Diego State, and I’ll eat my words as I had the Aztecs running away with that one. However, as much as this may come back to bite me, I think this could be a letdown spot for Boise State. Wyoming has had the bulk of the success against the spread at Albertsons Stadium, and have performed really well in conference. Granted, over the years, history has shown Boise State use Wyoming as a whipping mule, but I think this is a game that Wyoming can at least keep respectable, so I’ll take the Cowboys and the points here.