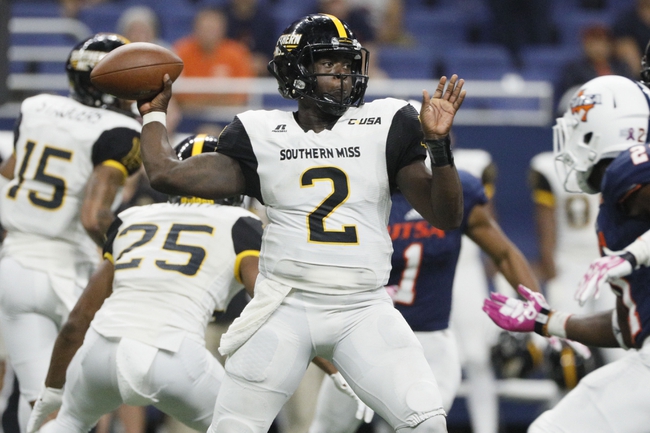 We have C-USA action on the gridiron on Saturday as the Southern Miss Golden Eagles pay a visit to the Louisiana Tech Bulldogs.

The Southern Miss Golden Eagles will look to build on back-to-back wins after a 24-0 shutout win over UTEP pushed Southern Miss to 4-2 this season and 2-1 in C-USA play. Keon Howard threw for 221 yards, a touchdown and 2 interceptions on 16 of 27 passing. Ito Smith rushed for 120 yards and a pair of touchdowns on 28 carries, while Jaylond Adams recorded a pair of receptions for a team-high 104 yards and a touchdown. Korey Robertson hauled in a team-high 5 passes for 52 yards as well in the winning effort for USM. Defensively, Southern Miss combined for a pair of sacks and an interception, all while suffocating the UTEP offense, holding the Miners to just 147 yards of total offense and dominating the time of possession battle, holding onto the ball for over 35 minutes in the win.

The Louisiana Tech Bulldogs will look to climb above .500 after a narrow 23-22 defeat to UAB sent the Bulldogs to 3-3 overall this season and 1-1 in C-USA play. J’Mar Smith threw for 209 yards and 2 touchdowns on 17 of 29 passing, while the Bulldogs combined for 154 rushing yards on 34 carries, led by Boston Scott’s 48 rushing yards on 14 carries. Teddy Veal led the team with 6 catches for 78 yards and a touchdown, while DeJuawn Oliver’s lone reception was a 42-yard touchdown grab. Defensively, the Bulldogs lone individual highlight came in the form of a Jaylon Ferguson sack as LA Tech gave up 366 yards of total offense in the losing effort.

Louisiana Tech is coming off of a bye week, but it’s the Golden Eagles who are 5-1 ATS this season and have been playing much more consistent football than the Bulldogs this season. Not to mention Southern Miss has won the last two meetings between the two teams, including a 58-24 rout of Louisiana Tech in their last trip to Ruston, so I’ll take the points in a game that Southern Miss has a good chance at winning outright.