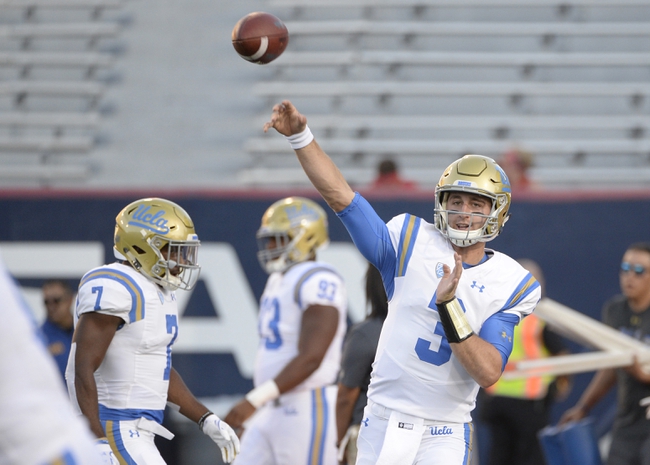 The Oregon Ducks and UCLA Bruins meet Saturday in college football action at the Rose Bowl.

The Oregon Ducks could use a big road victory here after losing three of their last four games. The Oregon Ducks have lost seven of their last nine road games. Braxton Burmeister is completing 52.8 percent of his passes for 172 yards, one touchdown and four interceptions. Burmeister and Justin Herbert have combined for 10 touchdown passes and six interceptions this season. Charles Nelson and Johnny Johnson III have combined for 471 receiving yards and two touchdowns while Dillon Mitchell has 19 receptions. The Oregon Ducks ground game is averaging 244.5 yards per contest, and Royce Freeman leads the way with 797 yards and 10 touchdowns. Defensively, Oregon is allowing 30.3 points and 362 yards per game. Troy Dye leads the Oregon Ducks with 62 tackles, Jonah Moi has 4.5 sacks and Thomas Graham Jr. has two interceptions.

The UCLA Bruins also need a victory here to get a game above a .500 record. The UCLA Bruins have won four of their last five home games. Josh Rosen is completing 64.2 percent of his passes for 2,354 yards, 17 touchdowns and eight interceptions. Rosen has thrown a combined eight interceptions in his last four games. Darren Andrews and Jordan Lasley have combined for 1,133 receiving yards and 10 touchdowns while Caleb Wilson has 38 receptions. The UCLA Bruins ground game is averaging 127.5 yards per contest, and Soso Jamabo leads the way with 249 yards and four touchdowns. Defensively, UCLA is allowing 40.5 points and 523 yards per game. Jaleel Wadood leads the UCLA Bruins with 40 tackles, Jacob Tuioti-Mariner has 2.5 sacks and Darnay Holmes has one interception.

The Oregon Ducks can't score without Justin Herbert at quarterback, and while he practiced a little bit this week, he's still expected to be out. The Ducks have scored a combined 17 points in their last two games, and that doesn't get it done in the Pac-12. The UCLA Bruins remain one of the worst defensive teams in all of college football, but they have an offense that can light the world on fire. As long as Rosen takes care of the ball, which he has done this season at home, the Bruins should be fine here. I'll take UCLA by a touchdown.