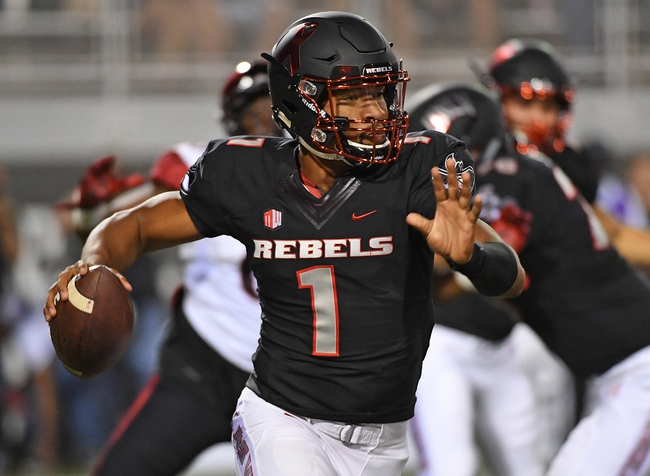 The Utah State Aggies are on the road in week eight to face the UNLV Rebels in a MWC bout. Utah State needs a win after consecutive defeats following a 28-23 loss to the visiting Wyoming Cowboys Saturday as a one point favorite at home. The Aggies led 16-9 at the half before the team struggled on both sides of the football over the final 30 minutes. USU led 363-293 in yardage but were hurt badly with five turnovers.

Utah State had a few nice gainers on the ground but finished with only a 3.5 yard average with LaJuan Hunt  being the most productive with 73 yards on 18 carries. The Aggies had too many issues throwing the ball with Jordan Love going 8-18 for 109 yards and three interceptions including a pick six before Kent Myers came in to go 11-20 for 94 yards  but the passing game struggled to stretch the field.

The UNLV Rebels are hoping for a boost from the home crowd when the Utah State Aggies visit on Saturday night. UNLV is looking to erase the memory of a 34-30 defeat at the Air Force Falcons where a huge first half lead vanished. The Rebels were up 27-7 at the half before falling apart over the final  30 minutes where Air Force went on a 27-3 run. The Falcons led 473-411 in yardage but UNLV won the turnover battle 4-2 in a game that was difficult to watch.

Rebels quarterback Armani Rogers struggled to hook up with his receivers as he completed 12-27 for 145 yards and an interception with Lexington Thomas catching a 47 yard pass. Rogers led a solid UNLV rushing attack with 148 yards on 16 carries with Thomas adding 91 yard on 17 totes with both finding the end zone.