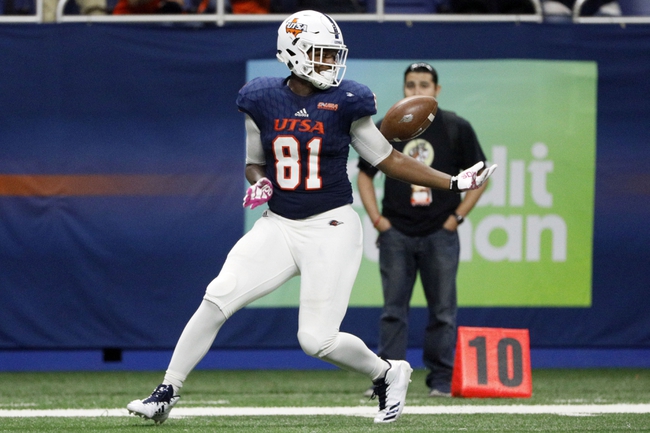 We have C-USA action on tap on the gridiron in week 8 college football action as the Rice Owls pay a visit to the UTSA Roadrunners on Saturday evening.

The Rice Owls come into this one looking to snap a 4-game losing streak after falling to Army by a final score of 49-12 in their last outing. Jackson Tyner and Miklo Smalls combined to go 9 of 21 for 146 yards with Tyner throwing a touchdown pass and Smalls throwing an interception. Jordan Myers led the team with 76 rushing yards on 15 carries, while Emmanuel Esukpa chipped in 56 rushing yards and a touchdown. Aaron Cephus led the team with 3 receptions for 87 yards and a touchdown, while Robby Wells III and Austin Waller each had a pair of catches and Lance Wright added 19 receiving yards in the loss. Defensively, a Cole Thomas interception was the lone highlight in an otherwise frustrating outing from the Owls’ defense, giving up 418 rushing yards to Army while being dominated in the time of possession battle, allowing the Black Knights to hold onto the ball for over 36 minutes when the clock hit :00.

The UTSA Roadrunners will come into this one looking to notch their first conference victory of the season after dropping back-to-back games, including a 29-26 loss to North Texas last time out. Dalton Sturm completed 13 of his 24 pass attempts for 216 yards and 2 touchdowns. Jalen Rhodes led the team with 71 rushing yards on 19 carries while Tyrell Clay chipped in 54 rushing yards of his own. Rhodes and Clay each recorded a receiving touchdown, while Josh Stewart led the team with 3 receptions for 54 yards and Greg Campbell Jr. chipped in 3 catches of his own. Defensively, Marcus Davenport logged 2.5 of the team’s 3 sacks, in addition to a Nate Gaines interception as UTSA allowed 441 yards of total offense in the loss.

I know UTSA has the better record, but Rice at least has a conference win, and this is a lot of points to lay considering that Rice is 4-1 ATS in the 5 all-time meetings between the two schools, and each of the last four meetings have been decided by 10 points or less. Sometimes, you have to throw records out the window and just go with what the trends give you, so that’s exactly what I’ll do here and take Rice with the truckload of points.