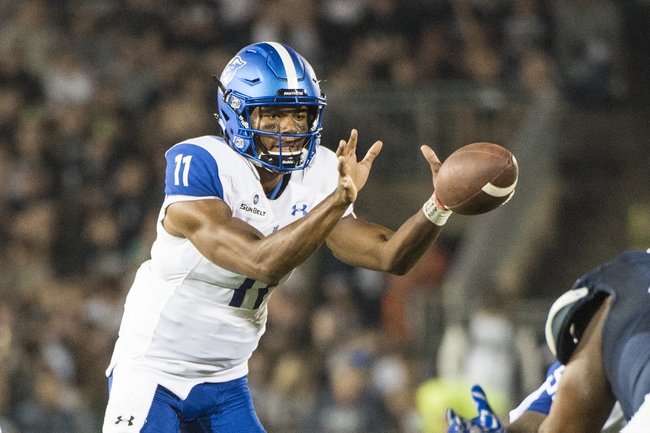 Down at Turner Field in Atlanta on Thursday, the South Alabama Jaguars and the Georgia State Panthers will be meeting up in college football action.

The Jaguars enter this game with a 3-4 record so far, falling to Ole Miss, Oklahoma State, Idaho and LA Tech while bagging wins over Alabama A&M, Troy and UL Monroe. In that one, South Alabama QB Dallas Davis put up three touchdowns and 317 yards on 20-of-33 passing.

So far this season, Davis has managed 924 yards, seven touchdowns and three picks, while Xavier Johnson leads the Jaguars in rushing with 448 yards and six scores on 75 carries. Sam Harris is the top South Alabama receiver with 24 catches for 361 yards and a score.

Over on the Georgia State side, they’re sitting at 3-3 on the season. The Panthers have beaten Charlotte, Coastal Carolina and UL Monroe while falling to Tennessee State, Penn State and Troy. In that Troy game, Georgia State QB Conner Manning put up 255 yards, one TD and one pick, while Glenn Smith led a paltry rush on 11 carries for just 19 yards.

On the year, Manning has logged 1516 yards, seven TDs and five INTs, and Smith is the top dog in the Georgia State rushing department with 66 carries, 184 yards and two scores. Penny Hart is far and away the Panthers’ lead receiver with 47 catches, 587 yards and six touchdowns.

South Alabama comes into this one with a little offensive momentum after scoring 33 points in their last outing. Prior to that, the Jags hadn’t put up more than 23 points in their previous three games. As for Georgia State, they had a good run going with at least 27 points in their three wins, but were stifled on just 10 points in the Troy loss. The Panthers have to find some more offensive variety besides relying so heavily on Hart, but I think they’ll figure it out here and cover.