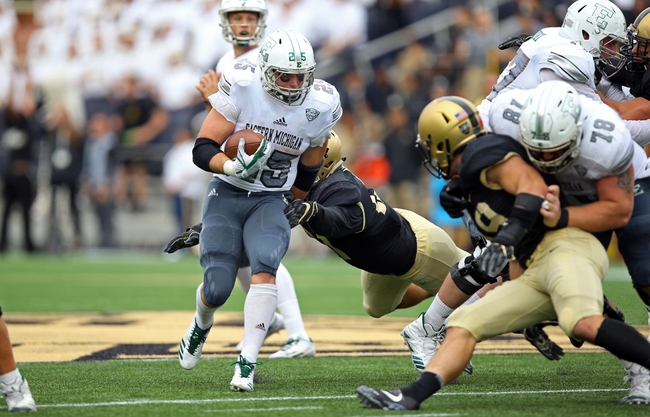 College football comes to Huskie Stadium when the Eastern Michigan Eagles take the field with the Northern Illinois Huskies in week nine.

EMU quarterback Brogan Roback connected on 28-44 for 308 yards and a touchdown and interception with Antoine Porter catching ten throws for 93 yards. Ian Eriksen was the top Eagles runner with 91 yards on 23 carries for 91 yards but the ground game wasn’t explosive except for a few big gainers.

The Northern Illinois Huskies look to stay unbeaten in the MAC when the Eastern Michigan Eagles come to town on Thursday. Northern Illinois has played well overall this year after a 48-17 win at Bowling Green a two touchdown favorite gave the team three consecutive victories. The Huskies owned a 577-367 edge in yardage and intercepted three passes and recovered a pair of fumbles with Sutton Smith returning one 16 yards for a score.

NIU did everything well with Tommy Mister leading the rushing attack with 115 yards and a 30 yard scoring run on 17 totes with quarterback Marcus Childers adding 73 yards on 19 carries while three others combined for 135 yards on 16 carries. Childers gave the Huskies a productive passing game on 21-33 for 239 yards with three touchdowns with Chad Beebe catching six throws for 124 yards and a touchdown.