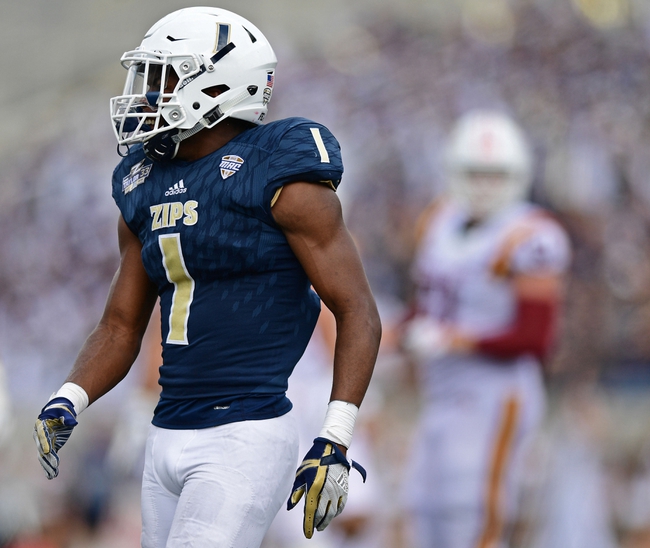 The lone MAC game on the slate Saturday afternoon pits the Buffalo Bulls against the Akron Zips in a week 9 college football matchup.

The Buffalo Bulls come into this one looking to snap a 3-game skid after falling to 1-3 in conference play and 3-5 overall this season following a 24-14 loss to Miami-Ohio in their last outing. Kyle Vantrease threw for 202 yards, 2 touchdowns and an interception on 17 of 41 passing, while Emmanuel Reed carried the rock 13 times for 56 yards. Kamathi Holsey led the team with 67 receiving yards on 3 catches, while Anthony Johnson caught a team-high 5 balls for 56 yards and a touchdown. Antonio Nunn and Tyler Mabry also caught 3 passes each, with Mabry logging 24 yards and a receiving touchdown of his own. Defensively, the Bulls allowed 349 yards of total offense in the loss, with Khalil Lodge leading the team with 4 tackles and 10 assists.

The Akron Zips come into this one looking to bounce back after suffering their first conference loss of the season, a 48-21 drubbing at the hands of Toledo to fall to 4-4 overall and 3-1 in conference this season. Thomas Woodson and Robbie Kelly combined to go 23 of 40 for 291 yards, 3 touchdowns and an interception, while the Zips as a team combined to rack up 42 rushing yards on 24 carries. Kwadarrius Smith put up 3 catches for 72 yards and a touchdown, while Tra’Von Chapman added a team-high 6 receptions for 70 yards and a TD grab of his own. Austin Wolf caught 4 passes while Kobie Booker added a TD as well in the loss. Defensively, a Ulysses Gilbert III interception was the lone highlight as the Zips were gashed to the tune of 626 yards of total offense put up by Toledo when all was said and done.

It’s hard to get a grasp on either of these teams, because Buffalo has been strong ATS, but Akron has been good as well, and there’s no shame in losing to Toledo but I’m not a fan of the Bulls’ loss to Miami-Ohio. When I look deeper however, the home team has won the last 4 meetings by a combined 114 points. So since this line is only around a field goal, I'll back the Zips to rebound here.