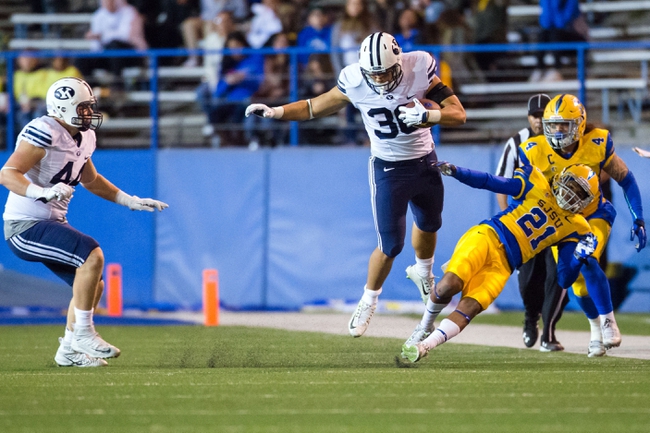 The San Jose State Spartans go on the road to take the field with the Brigham Young Cougars in Saturday college football.

The San Jose State Spartans visit the Brigham Young Cougars in search of win number two on the year. San Jose State comes off of a 37-26 loss at the Hawaii Warriors for the 6th consecutive defeat. The 17 point underdog Spartans held a 504-451 yardage  advantage but lost the turnover battle 2-1 while watching the Warriors return a missed extra point for two points.

SJSU could not stop Hawaii on the ground and didn’t do much running with 84 yards on 22 from Charles Nelson being the extent of the success. San Jose  State quarterback Montel Aaron completed 17-27 for 322 yards ad a pair of touchdowns and an interception with JaQuan Blackwell catching two balls for 99 yards while Rahshead Johnson caught 15 yard and 59 yards TD’s.

The Brigham Young Cougars are looking to end a long slump when the San Jose State Spartans take the field in week nine. Brigham Young were a six point road favorite at the East Carolina Pirates but struggled to find the end zone in a 33-17 loss for their 7th straight defeat despite both teams totaling around 420 yards. The Cougars had no dependable rushing attack with Ula Tolutau and KJ Hall combining for 108 yards on 24 carries which wasn’t enough to worry the East Carolina defense.

BYU quarterback Tanner Mangum enjoyed a solid performance through the air with 319 yards and a pair of touchdowns and an interception on 26-41. Aleva Hifo was the Cougars top receiver with nine receptions for 148 yards while Matt Bushman and Micah Simon  caught scoring passes.