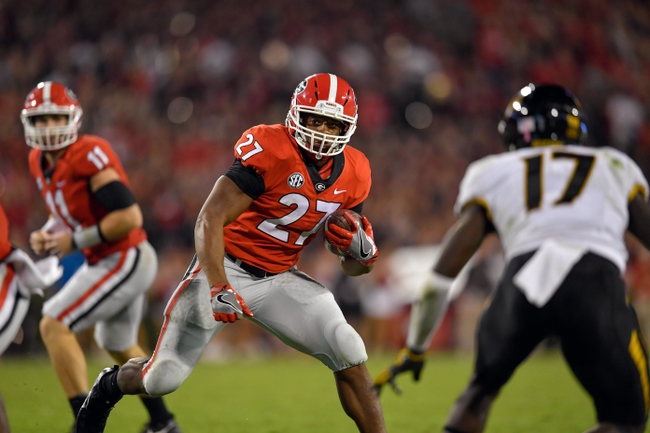 One of the oldest rivalries in college football adds another chapter, as the #3 Georgia Bulldogs face off against the Florida Gators.

The #3 Georgia Bulldogs have had an extra week to get ready for this game, fresh off of their 53-28 dismantling of Missouri to improve to 7-0 overall and 4-0 in SEC play this season. Jake Fromm threw for 326 yards, 2 touchdowns and an interception on 18 of 26 passing, while the Bulldogs combined for 378 rushing yards and 4 touchdowns on 48 carries. D’Andre Swift led the team with 94 rushing yards on 6 carries while Sony Michel added 86 rushing yards and a pair of touchdowns on 9 carries. Nick Chubb took a team-high 16 carries and spun them into 70 yards, while Mecole Hardman and the aforementioned Fromm each added a rushing score as well. Javon Wims led the Bulldogs with 5 catches for 95 yards, while Hardman added a pair of catches for 71 yards and a TD along with Riley Ridley who added a TD grab of his own in the win. Defensively a Dominick Sanders interception highlighted an otherwise solid outing from UGA, as the Dawgs held Mizzou to just 312 yards of total offense and just over 20 minutes of possession in the win.

The Florida Gators also come into this one off of their bye week, licking their wounds after back-to-back losses following a 19-17 defeat at the hands of Texas A&M in their last outing. Feleipe Franks threw for 129 yards and a pair of interceptions on 17 of 26 passing, while Malik Davis ran for a team-high 97 yards on 18 carries. Franks added 82 yards on 9 carries, while Lamical Perine chipped in 54 yards and a TD along with Dre Massey who added a rushing score of his own. Brandon Powell led the Gators with 37 yards on 5 receptions, while DeAndre Goolsby caught a team-high 6 passes in the loss. Defensively, the Gators combined for a pair of sacks and an interceptionall while Holding A&M to just 263 yards of total offense and just under 27 minutes of possession in addition to a 4 for 16 mark on 3rd down in the losing effort.

Normally I’d say take a home dog getting two free touchdowns in a rivalry game. However, this is the most focused I’ve ever seen a Bulldogs team, and they have a playoff spot in sight if they can avoid stumbling down the stretch. Florida just hasn’t looked good in their last couple of outings, and the same kind of sluggish performance won’t fly against a Georgia team that’s clicking on all cylinders right now. I’ll lay the points with Georgia here.