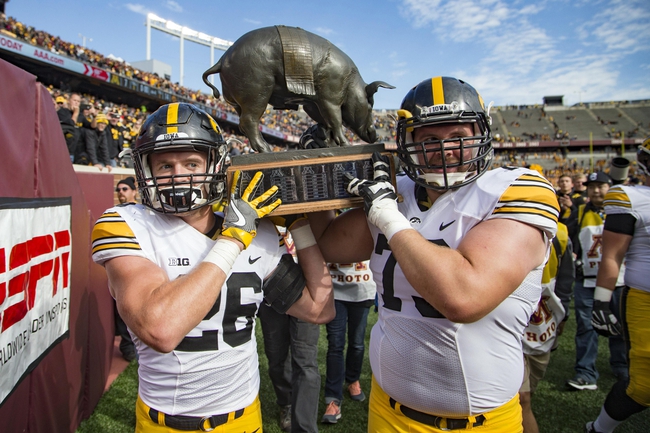 The Iowa Hawkeyes also look for a spark of consistency after splitting their last six games. The Iowa Hawkeyes have won five of their last six home games. Nate Stanley is completing 57.7 percent of his passes for 1,513 yards, 16 touchdowns and three interceptions. Stanley has two or more touchdown passes in five of his last seven games. Nick Easley and Matt VandeBerg have combined for 602 receiving yards and six touchdowns while Akrum Wadley has 18 receptions. The Iowa Hawkeyes ground game is averaging 131.5 yards per contest, and Wadley leads the way with 573 yards and four touchdowns. Defensively, Iowa is allowing 18.4 points and 381.3 yards per game. Josey Jewell leads the Iowa Hawkeyes with 70 tackles, Anthony Nelson has five sacks and Josh Jackson has two interceptions.

You can throw out stats and records during rivarly games, and this is a big rivarly that dates back to the 30s and the winner is rewarded the Floyd of Rosedale. The last two meetings between Minnesota and Iowa have been decided by a combined 12 points. As for the form right now, Minnesota has been hit or miss, but the defense has held its own and keeps the Golden Gophers in games. Iowa is coming off a physical overtime loss to Northwestern, and its only good win this season was an overtime contest to Iowa State. Neither team is going to blow the other out, so the points will come in handy in this spot.