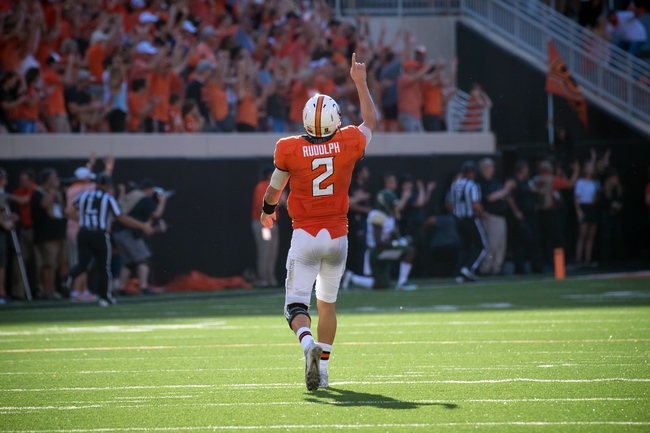 The Oklahoma State Cowboys look to keep their national title hopes alive with a road trip to oppose the West Virginia Mountaineers. Oklahoma State barely squeezed by the Texas Longhorns 13-10 in overtime on Saturday as a touchdown favorite. The Cowboys defense saved the day by allowing 283 yards and 3-17 on third down conversions while picking off a pass.

OSU totaled 428 yards but were extremely sloppy with four fumbles with one lost. Oklahoma State leaned heavily on the passing of quarterback Mason Rudolph who connected on 25-38 for 282 yards with Marcell Ateman catching four throws for 87 while Jalen McCleskey logged eight receptions for 78 yards. Justice Hill led the Cowboys rushing attack with 117 yards but it 33 carries.

The high powered West Virginia Mountaineers welcome the Oklahoma State Cowboys to town on Saturday. West Virginia rode their offense to a 38-36 victory at the Baylor Bears for back to back wins in week eight. The Mountaineers were in complete control with 38-13 lead heading to the 4th quarter before Baylor closed the game on a 23-0 run to make a laugher serious. Both squads approached 500 yards of offense but West Virginia mustered just 23 minutes of possession and committed eleven turnovers for 137 yards.

WVU didn’t burn any clock because Kennedy McKoy was the only runner of note with 55 yards on seven totes. Quarterback Will Grier gave West Virginia an explosive air attack with 375 yards and five touchdowns on 26-37 with the twosome of Gary Jennings and David Sills V combining for 15 catches for 252 yards with Sills grabbing three touchdowns.