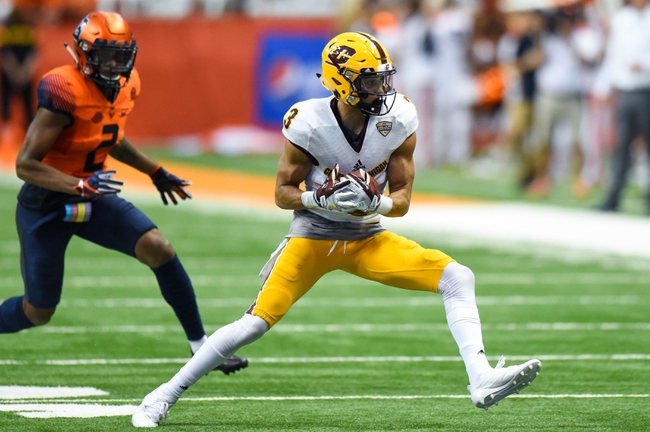 The Central Michigan Chippewas have their sights on back to back victories with a road trip to face the Western Michigan Broncos. Central Michigan kept their postseason hopes alive with a one sided rout of the Ball State Cardinals 56-9 as a field goal road favorite. The Chippewas jumped to a 28-6 lead at the half and never took their foot off the gas in piing up a 455-208 yardage edge.

CMU was effective on the ground with Jonathan Ward logging 97 yards and two touchdowns on 13 totes with Romello Ross adding 83 yards on 15 carries followed by Kumehnnu Gwilly with a 33 yard scoring run. Chips quarterback Shane Morris completed 16-21 for 199 yards and four touchdowns with Corey Willis grabbing five balls for 98 and three scores including a 63 yard TD.

The Western Michigan Broncos can stay in the MAC West race with a win versus the visiting Central Michigan Chippewas. Western Michigan kept those hopes alive with a 20-17, overtime decision at the Eastern Michigan Eagles as a 2.5 point favorite on Saturday. The Broncos were outgained 459-422 but won the turnover battle 3-2 in a somewhat ugly matchup which was what Eastern Michigan wanted.

The Broncos were strong on the ground with Jarvion Franklin grinding out 104 yards and a score on 24 touches with Jamauri Bogan totaling 74 yards on 12 attempts. WMU quarterback Jon Wassink was an efficient 16-24 for 190 yards and a touchdown with Donnie Ernsberger leading the receiving corps with six receptions for 91 yards while Keishawn Watson caught an eleven yard scoring toss.

With Western Michigan losing Wassink at quarterback I believe the Broncos will run the ball against a susceptable CMU run 'D' and defend against the pass wll enough to stay in the MAC race...