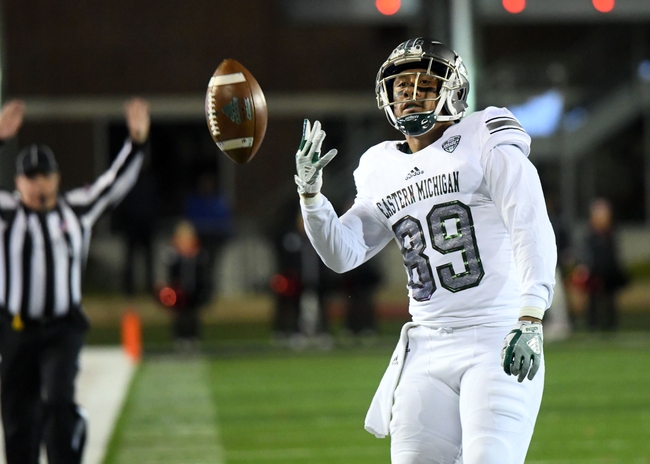 The Ball State Cardinals visit the Eastern Michigan Eagles in week ten looking to rebound from a string of losses. Ball State has been struggling on both sides of the football and those struggles continued in a 58-17 defeat versus the visiting Toledo Rockets for loss number five in a row. The Cardinals could not sustain anything on either side of the football and were outgained 606-309 with nothing coming from the air.

Ball State quarterback Drew Plitt completed 15-34 for  97 yards with top receiver Justin Hall recording seven receptions for 39 yards and running twice for 40 yards. The Cardinals ran the ball well at times with Caleb Huntley totaling 91 yards on 24 carries while Malik Dunner ran for 62 yards on six totes including a 41 yards touchdown dash. The Ball State special teams gave up an 87 yard punt return so the team had across the board issues.

The Eastern Michigan Eagles need to win out to save their season and that starts with the visiting Ball State Cardinals in week ten. Eastern Michigan drooped their 6th straight contest by a single score or less in a 30-27, overtime decision at the Northern Illinois Huskies as a 7.5 point underdog. Both teams finished with around 400 yards but the Eagles were one dimensional with little happening on the ground. Ian Ericksen was the only Eastern Michigan runner of note with 81 yard on 18 carries so the offense went to the air often.

EMU quarterback Brogan Roback connected on 22-44 for 262 yards and a touchdown while WR Isaac Holder hit Bryce Kemp with a 45 yard scoring strike. Sergio Bailey lead the Eagles receiving corps with three catches for 94 yards including a 68 yard touchdown. Jaron Johnson gave EMU another TD with a blocked punt recovered in the end zone.

I am backing Eastern Michigan  who might be able to save their season despite a string of close defeats. Having said that I can’t get excited by laying three scores…