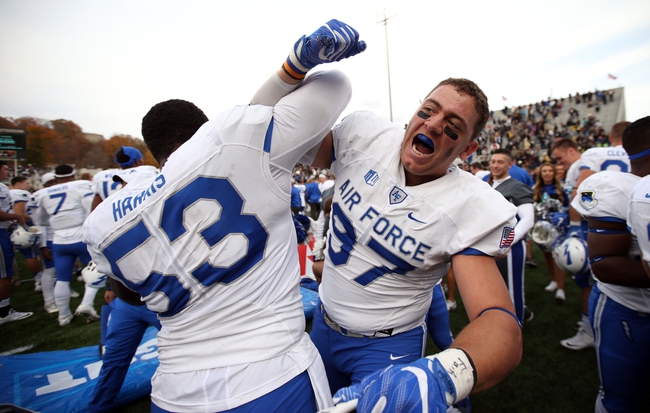 The Commander-In-Chief’s trophy is at stake when the Army Black Knights pay a visit to the Air Force Falcons in a week 9 college football matchup on Saturday afternoon.

The Army Black Knights will look to build on their 4th straight win, a 31-28 OT victory over Temple in their last outing. Ahmad Bradshaw, Kelvin Hopkins Jr. and Luke Langdon combined to throw for 141 yards on 8 of 18 passing, while combining as a team to rush for 248 yards on 50 carries, led by Darnell Woolfolk who racked up 132 rushing yards and 3 TDs in the loss. Kell Walker led the team with 3 catches for 59 yards while Jermaine Adams caught a pair of passes for 25 yards and a TD. Defensively, a James Nichtigal sack highlighted an otherwise frustrating outing for the Black Knights, giving up 506 yards of total offense in the win.

The Air Force Falcons will look to keep the momentum going after 3 straight wins to bring them back to .500 at 4-4 after a 45-28 win over Colorado State last time out. Arion Worthman threw for 64 yards, a touchdown and an interception on just 2 for 4 passing, while also leading the team in rushing with 25 carries for 117 yards and a touchdown. Jacob Stafford added 9 carries for 104 yards and a TD, while Taven Birdow chipped in 67 yards and 2 touchdowns on 15 carries. Altogether, the Falcons combined to rack up 421 rushing yards on 68 carries. Ryan Reffitt’s lone reception went 56 yards for a touchdown in the winning effort. Defensively, the Falcons combined for a sack and 3 interceptions while allowing the Rams to hold the ball for just over 18 minutes in the game while giving up 435 yards of total offense in that short span.

I know the points with Army are tempting, especially with the hook. However, Army have won only 3 meetings against Air Force since 1989, including Air Force wins in 7 of the last 8 meetings, all of which have come by double digits. These two teams run the same style of offense, and I feel that Air Force has the advantage here of being at home as well, somewhere that Army has struggled ATS, so I’ll lay the points with Air Force here.